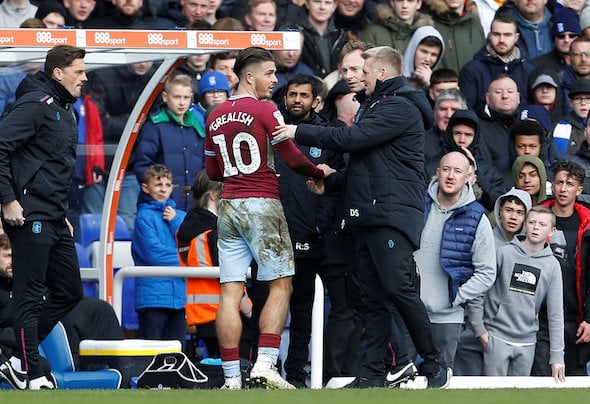 Jack Grealish can develop into a “great player” if he consistently adds more goals to his game, according to Noel Whelan.

The former Leeds United and Coventry City striker, now a pundit for BBC Sport and Football Insider, is a big admirer of the Aston Villa playmaker but says he must be more effective in and around the box to realise his immense potential.

Grealish has spearheaded a Villa revival since his return from a three-month injury absence and helped catapult them into fifth place in the Championship on the back of a seven-match winning run.

He scored the winning goal, his fifth of the season, in Wednesday night’s 2-1 league triumph at Rotherham to further demonstrate his side’s promotion credentials.

Speaking exclusively to Football Insider, Whelan explained what makes Grealish special and what he must change to go to the next level.

“There’s definitely a great player there,” Whelan said. “I think you can only judge somebody really when they’ve been playing at the top level for a number of years, Jack is still maturing as a player, he’s got all the attributes you would want from a midfield player.

“The one area that I’d think he would like to improve on, and other people would like to see him improve on, would be his goal scoring record and assists ratio. As a midfield player, if you’re going to be playing that high up you’ve got to be adding a few more goals to your game, a bit like Frank Lampard.

“He seems to play very safe outside the box, he scores goals from outside the box, can you get yourself inside that penalty area? Can you make a run from midfield and get a header, a volley, get a goal?

“I think If he can add that to his game then you have potentially one of the best midfield players going.”

Grealish has scored three goals in his seven matches since returning from injury and Villa are now well placed to reach the end-of-season play-offs.

With five games of the campaign remaining, they have 66 points, five ahead of Middlesbrough in seventh position.