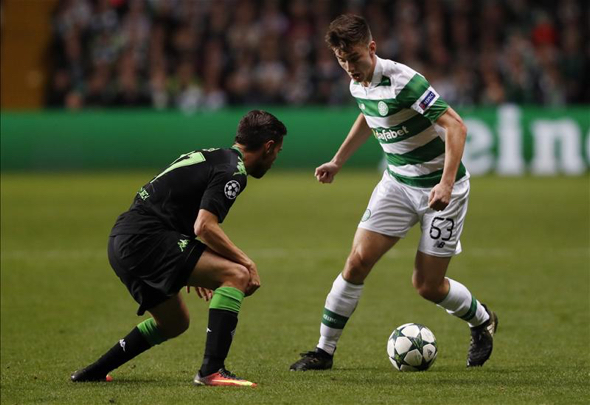 Crystal Palace are keeping tabs on crocked Celtic star Kieran Tierney, according to a report.

The Guardian claim that Alan Pardew’s out-of-form side have identified a number of left-backs as potential targets, with Tierney high on that list after starring in the Champions League.

Tierney, 19, has caught the attention of a number of clubs down south after becoming a mainstay of Brendan Rodgers’ Celtic side, before breaking his ankle in a freak training ground incident.

A product of the Celtic youth academy, Tierney has made 20 league and cup appearances this season but has since been sidelined by the injury.

The Hoops are likely to want a large figure for their teenage starlet, with five years remaining on his Celtic Park deal.

Wearing the number 63 shirt, Tierney has proved that he already has what it takes to perform in the Premier League after starring against Manchester City.

Former West Ham and Newcastle boss Pardew will want to replace Souare, who is set to miss the African Cup of Nations after crashing his car in September.

He is set to return in February or March, as Martin Kelly continues to play out of position on the left side of defence.

Celtic could use the opportunity to cash in on one of the hottest properties in Scottish football, by charging a hefty amount for the young star. However, it is unlikely that Palace will want to spend much on Tierney with other options out there. Leeds star Taylor is likely to be available at a cut-price deal in January, proving a better option to the Eagles financially. But with Tierney still only 19, Palace could be tempted to bring in the Hoops star with his best years still ahead of him. If Rodgers wants to continue to see Celtic grow though, keeping the likes of Tierney and Dembele must be prioritised as he looks to build his new side around them.

In other Celtic transfer news, this international striker is on the radar of Rodgers ahea dof the January window.