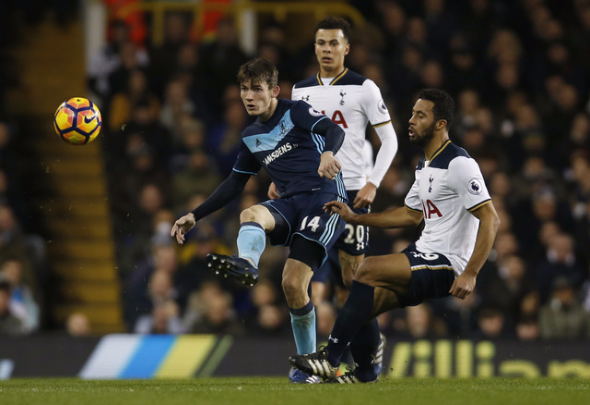 The 25-year-old made the switch to the north of England just last summer in a £12million deal from Serie A club Atalanta.

The midfield enforcer has played 22 times for Aitor Karanka’s side in all competitions this season, bringing a return of three goals.

His Boro team are set to welcome the Toffees to the Riverside Stadium on Saturday afternoon and he could see it as an opportunity to impress his fellow Dutchman Ronald Koeman.

“I am incredibly lucky – I play for a good club and live in a nice area – but I am ambitious as well,” told De Roon to  Voetbal International magazine, as quoted by the Sun.

“I won’t get to play for Manchester City, or another club among the top five in England.

“But I do think that I can develop myself to the level needed to play for a club like Everton.
“But there is a long way for me to go.  I first need to become the best player at Middlesbrough – that is the next step for me.
“There is a mighty atmosphere at Goodison Park.  But I’ve had goosebumps at Bournemouth as well, and the noise levels at the Riverside Stadium are superb.”
Everton are currently well stocked in the central midfield area, specifically in the enforcer role with new signing Morgan Schneiderlin alongside Idrissa Gueye, Gareth Barry and emerging star Tom Davies.
However, with the experienced Barry now at 35, Koeman could be on the look out for a further addition in the not so distant future.
De Roon’s comments are unlikely to have gone down too well with the Middlesbrough faithful, but they will be keen to see their side at full strength as they welcome the seventh placed Toffees at the weekend.

The timing of these comments is extremely strange and one which will have not gone down well with the Middlesbrough staff or fans. The player is clearly angling for a way out of the club and this could be his first foot out of the door. However, if he thinks he is good enough for a club such as Everton then he clearly has delusions of his own talents. De Roon is hardly pulling up trees at a lesser team in Boro and as mentioned the Toffees are well stocked in the centre of the pitch. At 25 the midfielder is already close to his peak years and has little growth left. Therefore, he should focus on playing for a club at his level like Middlesbrough before talking about joining other teams.

In other Everton transfer news, the Toffees are in a battle for this Euro wonderkid.