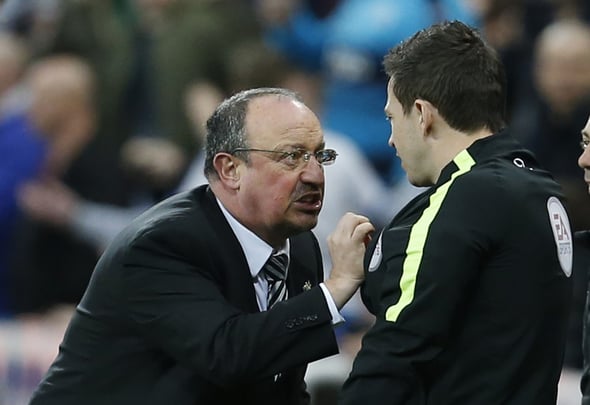 Rafa Benitez has revealed that he spoke to referee Keith Stroud about his controversial decision in Newcastle’s 1-0 win against Burton on Saturday.

Stroud incorrectly awarded the Brewers an indirect free-kick when Dwight Gayle encroached on Matt Ritchie’s penalty while the game was goalless.

The referee should have instead given the Magpies a chance to retake the spot-kick.

The PGMOL released a statement after the game confirming that Stroud misapplied to law.

However Benitez didn’t want to talk too much about the first-half blunder as Ritchie managed to score in the 68th minute to guide his team back to the top of the Championship.

Brighton eased to a 3-1 win against Birmingham on Tuesday meaning that their title bid would have suffered a serious dent if they failed to overcome struggling Burton.

“The referee and me have been talking. We need to move forward. We can’t change what happened. We got three points. We have to be ready to be stronger for the next one. After the incident we were losing our focus. We won,” said Benitez, as quoted by the Independent.

“We knew this team was difficult to break down and to beat with a line of five at the back. We needed to make sure there was no mistake. We did it until the end and we couldn’t be relaxed.”

With six games to go, the Magpies have a slender one point lead over Brighton at the top of the league.

Both sides look set to earn automatic promotion to the Premier League, but the competition to lift the trophy is as hot as it’s been all season.

Newcastle have two tough fixtures against Sheffield Wednesday and Leeds on the horizon as both clubs occupy play-off places.

Brighton have back-to-back away games in their next two matches against QPR and Wolves.

In other Newcastle news, these Euro giants are reportedly plotting a summer swoop for this Tyneside wonderkid.