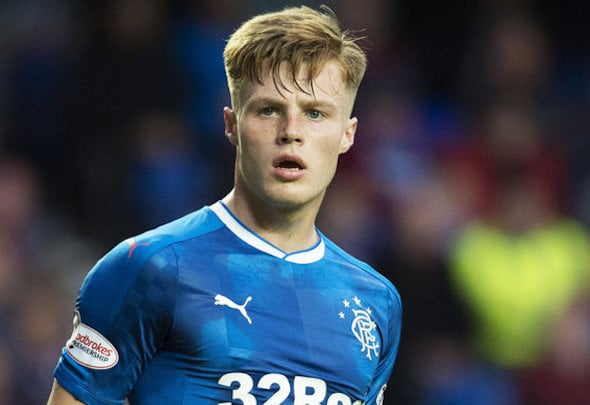 Rangers defender Aidan Wilson could be handed a huge opportunity after David Bates’ shock announcement that he will join Bundesliga side Hamburg in the summer – and Wilson has the ability to follow Ross McCrorie into the starting XI at Ibrox.

The central defender is currently on loan at Championship side Dumbarton but with Bates now moving elsewhere at the end of the season it clears a space up in the first-team squad for the Scottish youth international.

Wilson has been one of the stand-out performers for the Gers Under-20s side over the last couple of seasons  but has struggled to get regular game-time at Dumbarton since joining Stevie Aitken’s side.

The 19-year-old’s performances for the Under-20s were rewarded with his first-team bow last season as he made a couple of appearances for Pedro Caixinha’s side – as well as being part of the group who travelled to the United States in January to compete in the Florida Cup.

Wilson’s progression has impressed the Gers’ coaching staff and the Helensburgh-born defender will be hoping to follow McCrorie and Bates into the first-team after regularly starring with the pair in defence for Murty’s Under-20s.

The Gers will almost certainly need to go into the transfer market and bring in a defender in the summer – maybe more if they can move Fabio Cardoso and Bruno Alves on – but Wilson should be able to provide some good competition and add some depth to the Light Blues squad next season.

The Gers handed Wilson an extension to his current contract earlier in the season, keeping him at Ibrox until the summer of 2020, and the 19-year-old could be the next youngster from the club’s Auchenhowie Academy to make a name for themself in the first-team.