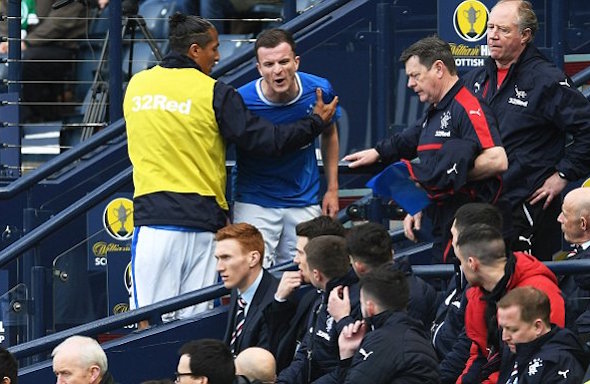 Rangers fans have taken to Twitter to annihilate Andy Halliday for his performance in the thrilling 5-5 draw with Hibernian at Easter Road on Sunday as the curtains were drawn on the Scottish Premiership season.

Halliday, 26, was again forced to start at left-back with Declan John injured and Lee Wallace suspended, however he failed to convince fans that he should be kept in the summer after a horrific display in the Light Blues defence.

The former Middlesbrough player has been used mainly as a midfielder in his spell at Ibrox, however he has been utilised at left-back more recently, and the results have been worrying to say the least.

One Rangers fan went so far to say that the Gers had “best get his contract ripped up.”

Should have left Andy Halliday in Azerbaijan @RangersFC

Halliday needs to go, glad Bates is away

Andy Halliday isn’t good enough for anyone in this league. Simple!

The delayed reactions of the likes of Halliday and Martin is really quite breathtaking. Not picking up any runners. Absolutely embarrassing.

Halliday has made 15 appearances across all competitions since returning to Ibrox in the January transfer window after his loan deal at Azerbaijani side FK Gabala was terminated early.

He played just seven times for Gabala in what was an extremely odd loan deal that may have done the player more harm than good.

Now, Halliday seems like someone whose place at Rangers may be under threat in the summer.

He was cast out by Pedro Caixinha last summer and if Steven Gerrard has been watching his performances, it’s more than likely that he will be in the shop window again.