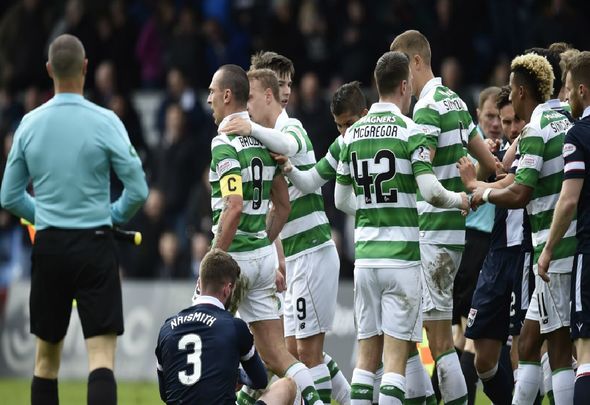 Rangers fans have accused their Old Firm rivals Celtic of abusing the system after they appealed Scott Brown’s suspension.

The Bhoys captain was sent off in the latter stages of Sunday’s 2-2 draw with Ross County for an ugly challenge on Liam Boyce.

The Scottish Football Association would usually hold a hearing for appeals in the week the incident happened.

However the Easter holidays meant that this week’s was postponed until April 27 – four days after the Scottish Cup semi-final showdown between Gers and the Hoops.

The SFA confirmed the appeal and the hearing date on their official website.

All players are available for selection until their case is heard meaning that Brown can play on Sunday, despite his red card seeming to be the correct decision.

Rangers fans were not happy with the outcome and have blasted their Glasgow rivals for lodging what they deem to be a frivolous appeal.

One fan, however, was bullish and said he didn’t want Celtic to have any excuses for when they lose!

Just as well Nuclear plants dont run on SFA basis ; "we are closed for Easter. No maintenance.If nuke core pops in meantime , tough"

The inconsistent approach to disciplinary issues is a joke. No wonder fans call you into question all the time. Total embarrassment.

I want him to play… No excuses
Bring it on🇬🇧🇬🇧

The scottish system is a joke. If a team appeals a red card and its upheld, they should be banned for a further 2 games.

Celtic’s decision comes ahead of what is one of the most important games of their season.

Brendan Rodgers and his men face off against Rangers in what is the penultimate hurdle for their quest to achieve the domestic treble.

They have already secured the Scottish League Cup and Premiership titles and a win against Pedro Caixinha’s men would set up a final against either Hibernian or Aberdeen.

In other Rangers news, Chris Sutton has said how many members of Caixinha’s squad would get into the Celtic team.