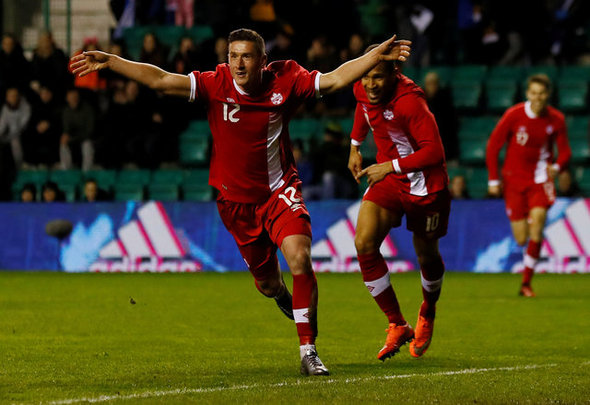 Former Rangers midfielder Fraser Aird scored his first goal for Canada in the draw against Scotland on Wednesday evening – and Gers fans on Twitter were pleased for him.

Gordon Strachan’s team went into the friendly clash at Easter Road as huge favourites with 50 places currently separating the two sides in the FIFA World rankings.

However, it turned out to be a poor result for Scotland with Aird opening the scoring after just 11 minutes before another former Rangers man in Steven Naismith scored the equaliser and final goal 10 minutes before half-time.

He totalled 85 appearances for the club, returning 12 goals and 17 assists, but he was allowed to leave in January with the club agreeing to a mutual termination of the now 22-year-old’s contract.

The right-winger has since joined Falkirk in the Championship, but his goal on Wednesday evening certainly brought a lot of attention back to himself from the Gers fan base on social media.

One Rangers supporter shared that he thought Aird was the best player on the park, while another demanded the club re-signed him.

@FraserAird Best player on the park last night young man.. to be fair you should have had about 3 or 4 😂

Says a lot for Scotland. 💩

Aird failed to make a single appearance for Rangers this season, but he has appeared eight times for Falkirk, bringing in one goal.

He will now be looking to help the second placed Bairns win promotion back to Scotland’s top-flight.

In other Rangers news, here are three players the Gers could sign to replace Martyn Waghorn in the summer.