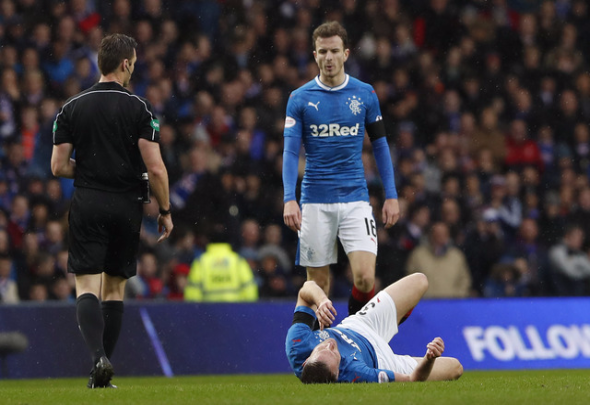 Rangers have received a massive boost as Clint Hill has confirmed he is fit to play against St. Johnstone on Wednesday.

The 38-year-old missed the loss to Inverness on Friday but in a press conference covered by the official Rangers Twitter page, he has said that he is back in training and looking forward to returning to action.

Hill missed the 2-1 defeat after receiving whiplash in the loss to Dundee five days earlier. Danny Wilson stepped into Graeme Murty’s defence in his absence.

The Cally loss was the first time Hill missed out on the Gers’ match day squad since a one match suspension was picked up when he was sent off against Aberdeen in early December.

“I trained today, so I am fit and ready to go for Wednesday night,” Hill said.

CH: I trained today, so I am fit and ready to go for Wednesday night.

The veteran centre-back has made 23 appearances for the Light Blues in all competitions this season and has scored three goals in the process, which included a brace against Peterhead in that last 16 round of the Scottish Cup in September.

Hill is in his debut season at Ibrox after being released by Queens Park Rangers, where he spent six years, at the end of last season.

He made 185 appearances in all competitions for the Loftus Road club and has also had spells at Crystal Palace, Stoke and Oldham.

The centre-back will now be hoping to help Rangers back to winning ways after back-to-back defeats saw them slip nine points behind second-placed Aberdeen.

In other Rangers news, three changes are expected for the club’s showdown with St. Johnstone.