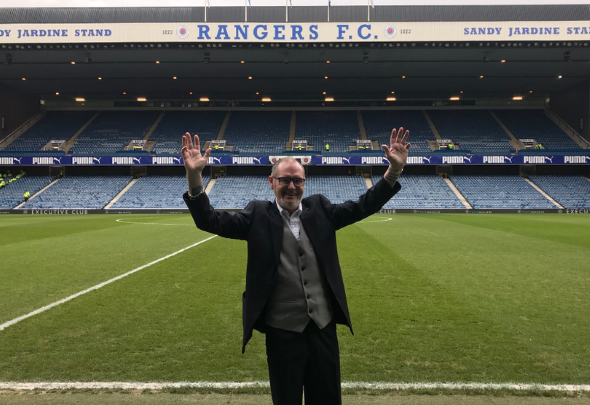 Rangers icon Paul Gascoigne has sent a message thanking Gers fans for the reception he received after returning to Ibrox for the 2-1 defeat by Hibs on Saturday.
The Rangers and England legend was presented to the Ibrox fans at half-time and received a phenomenal reaction from the sold-out Ibrox crowd.
Gascoigne spent two-and-a-half years at Ibrox  after joining from Italian giants LAzio for £4.3million and quickly became a legend at the Glasgow giants with his performances in Walter Smith’s unstoppable team of the late 1990s.
The Geordie genius thanked fans for the response – calling the Gers fans “unbelievable.”
“Just been watching the Gers. I appreciate the reception. What a club and the fans are just unbelievable,” Gascoigne said on his personal Twitter account.
https://twitter.com/Paul_Gascoigne8/status/959825666823852032
Gascoigne made 104 appearances for the Gers between 1995 and 1998, scoring 39 times and was responsible for one of the greatest individual performances the 119-year-old stadium has witnessed when he single-handedly destroyed Aberdeen at Ibrox in 1996 as the Gers secured their eighth of nine consecutive Scottish titles.
The mercurial midfielder lifted two Scottish titles, a Scottish Cup and Scottish League Cup at Ibrox before heading south to join Middlesbrough in March 1998.
Gascoigne’s impact in Scotland was so great that when the then-England international arrived in Glasgow with a bleached blonde haircut, thousands of people across Scotland followed suit within days.
In other Rangers transfer news, we can reveal the identity of the 12-goal striker who the Light Blues tried to sign in the final hours of deadline day.
We’ve launched a << BREAKING NEWS FEED>> exclusively for your club. ‘Like Us’ on Facebook by clicking here if you want 24/7 updates on all Rangers breaking news.