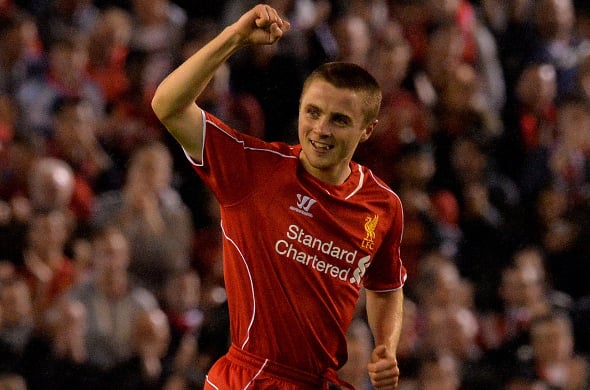 Rangers will save £7.75million by signing Jordan Rossiter from Liverpool this summer for a fee of just £250,000, according to a report.

The 19-year-old Anfield Academy graduate has agreed to join the Scottish giants when his contract expires at Anfield.

According to the Daily Mail, Liverpool would demand at least £8million in compensation for the England international were he to join another English club.

Rossiter is out of contract at the end of the season and is set to exploit a FIFA loophole allowing him to join a club outside of England for just £250,000.

The Liverpool Echo report that the Scottish giants contacted the Merseysiders on Friday afternoon to inform them they plan to officially approach the midfielder.

Talks are set to take place over the coming days to formalise the deal after Rossiter made up his mind to move north of the border and play in the Scottish Premiership next season.

Rangers are said to be confident that the teenager will be their first signing of the summer as manager Mark Warburton prepares the team for life back in the top flight next season.

Liverpool would have taken it to a tribunal if Rossiter had wanted to sign for another English club but the youngster has taken advantage of a loophole in the rules to move for a cut-price fee.

Rangers’ head of recruitment Frank McParland, the former Liverpool Academy director, is a big admirer of the tough-tackling midfielder and provided a glowing endorsement to Warburton.

The England Under-19s international has been forced to weigh up his options in recent months with no new contract on the table.

According to the Echo, Liverpool did belatedly offer him an extension but that was largely to ensure that they would be able to claim a compensation fee if he left.

But there has been no indication he figures in Jurgen Klopp’s plans in a campaign in which the youngsters have been handed lots of first-team chances due to the team’s gruelling fixture list and various injury problems.