Preston are preparing a six-figure bid for Rangers attacker Joe Garner, according to a report.

The Daily Record claim that the Championship club want to sign the 29-year-old, who managed 10 goals across all competitions this season.

It is understood that Preston are keen on re-signing Garner despite only selling him to the Gers for £1.8million last summer.

The report details that Preston are eyeing a £500,000 bid for the striker and that Rangers are willing to let him go while also suffering a huge loss on his initial fee.

Ipswich are believed to also be in the running for Garner’s signature, but it’s believed the player would favour a return to Deepdale.

Garner has endured a frustrating 12 months at Ibrox and has been unable to fully convince the club’s supporters of his quality.

The English striker has been unable to cement a position in the starting line-up and been one over several Rangers attackers that have been unable to deliver fully in front of goal.

He managed 10 goals during his 37 appearances across all competitions, but it appears manager Pedro Caixinha is still willing to let him leave.

Garner’s form picked up at the back-end of the season and he proved that can be a threat, but Rangers are probably best searching elsewhere for a main goal threat. They look set to lose £1.3million on his sale and it suggests they hugely overpaid in the first place. Caixinha needs to bring in a prolific striker that can help his side compete at the top-end of the table and Garner doesn’t have the quality to do so. Veteran forward Kenny Miller was the club’s top scorer and that shows that they are seriously lacking the front end of the pitch.

In other Rangers transfer news, Nacho Novo believes that Barrie McKay should be given a second chance at the club. 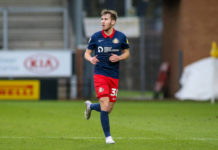 Phillips: Sunderland tipped to sign striker and left-back as Vokins set to leave