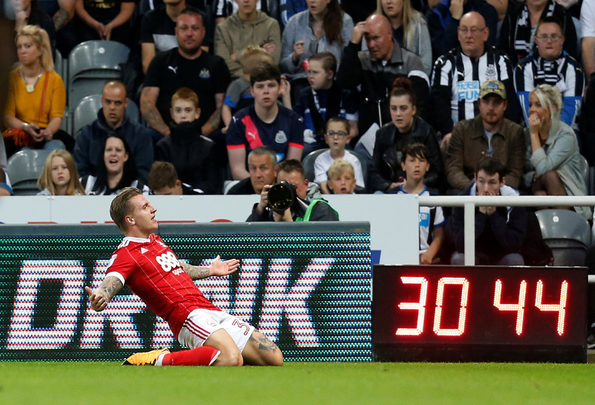 Rangers are plotting a January swoop for Nottingham Forest forward Jason Cummings, according to a report.
The Sunday Post claims that Forest value Cummings, 22, as being worth £1million and a bid of that much should be accepted should the Gers put the cash on the table.
Cummings moved to Forest in the summer from Hibernian for around £1million, having been signed by then boss Mark Warburton.
The 22-year-old has struggled in England, scoring only four goals in 17 appearances across all competitions.
This is in direct contrast to his time in Edinburgh, where Cummings scored 20 goals in his last three seasons, including eight goals in matches against Rangers.
Cummings has recently found himself outcast from the Forest first-team by Warburton and he has not started a Championship game since October, leading to the former Rangers manager to deny any kind of bust-up with the ex-Hibernian ace.
The Sunday Post report also claims that another Old Firm bit of business that could be done in January is Southampton thinking about a £10million bid for Celtic midfielder Stuart Armstrong.
Football Insider verdict
This move for Cummings seems like a no-brainer for the Light Blues. Scoring goals has been a problem for the Ibrox side this season, with Alfredo Morelos playing well but missing too many chances, and Kenny Miller struggling with injury as age finally catches up with him. £1million seems like a bargain price for a player who has proven he can do it in Scotland 20 goals a season – even if it was in the Championship – is a fine record. The signing of Cummings would be a statement from the Gers that they mean business in the second-half of the season and beyond.
In other Rangers news, Jamie Murphy has revealed his delight at joining the Gers
We’ve launched a << BREAKING NEWS FEED>> exclusively for your club. ‘Like Us’ on Facebook by clicking here if you want 24/7 updates on all Rangers breaking news.