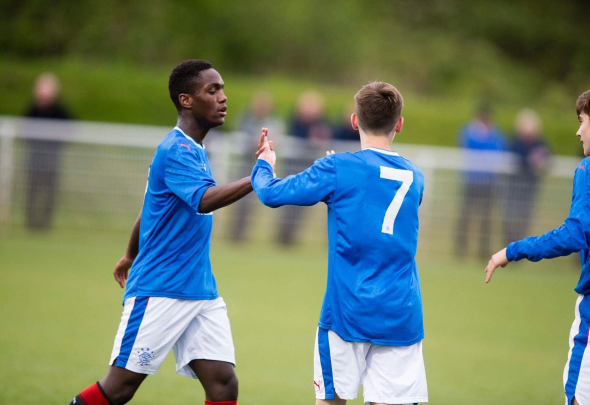 Rangers youngster Mati Zata is determined to use his loan spell at Lowland League champions East Kilbride to lift silverware and propel himself into Pedro Caixinha’s long-term Ibrox plans.

The 17-year old joined Kilby on loan until January and made his debut in the 1-1 draw with Stiling University and wants to help the K-Park side to a second successive league title.

“My aim is to give back to the club for bringing me here and help them win the league,” Zata told the Daily Record.

“People will be thinking that coming to the Lowland League is a step down but I see it as a chance to test myself in a team that wants to win and knows how to win.

“I don’t just expect to walk into the team because I’ve come from Rangers.

“I want to earn my way in by impressing the manager.”

Zata joined Rangers from Alloa Athletic in 2013 and was a regular in Billy Kirkwood’s under-17 side last season as they reached the City of Glasgow Cup final and came so close to lifting the U17 league title.

Despite their record breaking season, Kilby were unable to gain promotion to League Two after falling to Cowdenbeath in the playoff final.

Zata almost grabbed a dream debut goal for East Kilbride but was unable to keep his volley on target late in the second half.

The youngsters performances for Rangers’ Academy sides have also caught the eye of Ibrox U20s boss Graeme Murty with Zata featuring for the Development Squad on a number of occasions last season, as well as representing Scotland’s youth sides.

Although he is only 17, Zata has shown experience well beyond his years, admitting that he lacks on the physical side compared to the teams he will be coming up against, telling the Daily Record: “I’m here to gain experience against older players. I’m playing against men in this league and I feel I have coped well so far.

“The players are a lot more physical than me, so it will be a test.

“But I can use my head instead of my body to make sure I don’t get involved in a physical battle if I don’t need to.

“I want to make a name for myself at East Kilbride and leave a good impression.”

In other Rangers news, Kenny Miller has been blown away by one of the club’s signings.