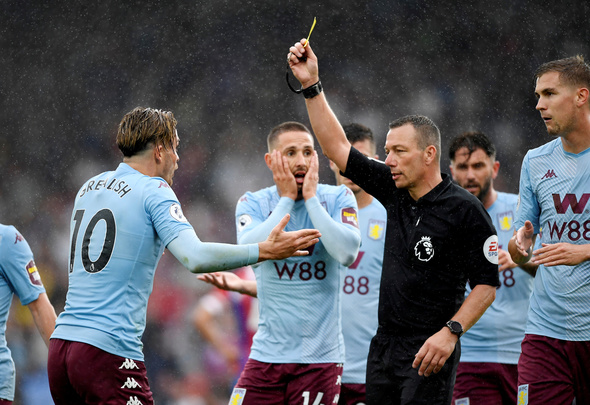 The former Villa and England striker, speaking exclusively to Football Insider, says that the official was too quick to blow his whistle and show the Villans’ ace a yellow card for diving, with replays suggesting there was contact between Grealish and the Palace defenders.

Grealish’s run through the heart of the Eagles’ defence saw Henri Lansbury stick the ball in the back of the net for what he thought was the equalising goal, only for Friend to award a free-kick and book Grealish for simulation.

Bent says that it was a shocking decision from the referee and that he should have allowed play to go on, giving VAR the chance to review the goal afterwards.

He told Football Insider: “He had a big shocker. He was way too premature in blowing the whistle because when you look at Jack Grealish’s reaction – first and foremost he’s driving with the ball at full speed, so he’s going to be off-balance.

“He’s got three or four opponents round him, gets a little nudge in the back and goes down but jumps straight back up. For the referee to blow so quickly and insinuate that he’s dived, it’s such a bad decision.

“He’s gone down and got straight back up again. It’s really disappointing for Aston Villa, who worked really hard.”

Villa’s defeat is their third in their four Premier League games, having been beaten by Tottenham and Bournemouth in recent weeks.

Their only points to date came in the 2-0 win over Everton at Villa Park, leaving them sitting 18th over the international break.

In other Aston Villa news, Bent has told Football Insider that he is very excited by one youngster he can’t wait to see more of.