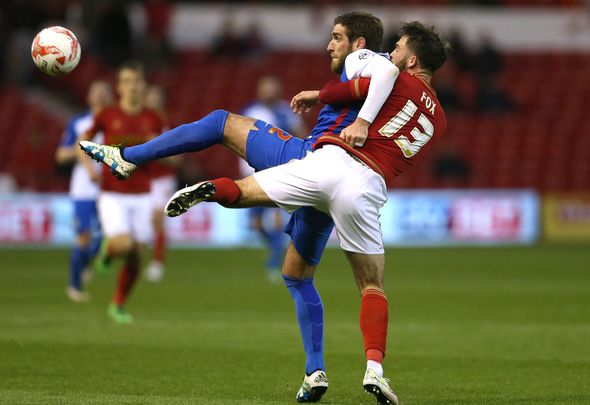 Nottingham Forest caretaker manager Gary Brazil should recall the experienced Danny Fox to his side when they take on Leeds in the Championship on Wednesday.

Brazil should make just one other change to his line-up, with midfielder Pajtim Kasami coming in for Matt Mills, who picked up a groin injury in Nottingham Forest’s last outing.

They beat Bristol City 1-0 on Saturday to reward Brazil with a win on his very first game in charge of the club, following Philippe Montanier’s dismissal.

The victory was a much-improved display to that they have shown through large parts of the season, and Brazil should therefore stick with the majority of the side that did the business for him against Bristol City.

Vladimir Stojkovic began the season as Forest’s No.1 goalkeeper, but has recently lost his place to Stephen Henderson, and that is not likely to change against Leeds.

Henderson has kept back-to-back clean sheets, and will have to be at his best again to keep out a formidable Leeds’ attacking force led by 19-goal Chris Wood.

Meanwhile, Danny Fox should be recalled in place of Daniel Pinillos, as the 30-year-old’s experience will be crucial to keeping Leeds wide-man Pablo Hernandez at bay.

Michael Mancienne, Jack Hobbs and Eric Lichaj should make up the remainder of the back-four, with Mills likely to miss out.

Wales international David Vaughan should be deployed as a defensive-shield once more for Forest, with defensive security likely to be the priority as Leeds look to affirm their home advantage at Elland Road.

Pajtim Kasami has been out of the side in recent weeks, but may be forced to return in a central-midfield role, due to a lack of other options.

He should partner the impressive Ben Osborn, following Henri Lansbury’s move to Aston Villa; while Chris Cohen remains sidelined with a long-term injury.

Matty Cash, Jamie Ward and Britt Assombalonga should continue in their respective attacking roles to give Forest the best possible chance of snatching a priceless victory away at the Championship’s fourth-placed side.

A second win in as many games for Nottingham Forest could see them continue their rise up the table to 15th. Defeat, meanwhile, will do little to ease their relegation fears, with just a five-point cushion above the relegation zone.

In other Nottingham Forest news, Barnsley manager Paul Heckingbottom has been installed as Sky Bet’s favourite to take over at Forest.