The future of Leeds United manager Paul Heckingbottom has been cast into doubt if comments attributed to a reliable journalist are anything to go by.

Alan Nixon, a leading sports writer for The Sun publication, delivered what many would consider a bleak outlook for the Whites senior man.

When asked on Twitter whether in his knowledge Heckingbottom was safe, his response was an ominous, “Clearly not.” Heck only took command of matters at Elland Road back in February following on from the dismissal of the then manager Thomas Christiansen on an 18-month deal.

But results failed to improve since the change in management which has led to many suipporters calling for the head of the former Barnley boss.

It would not be a massive surpirse to see the back of Heck after only a matter of months in charge at the club. Results have not improved under Heck, in fact, they have been relegation standard, and the sentiment that the 40-year-old is out of his depth at a club the size of Leeds is so far proving to be the truth. And with the likes of Sam Allardyce now back on the radar follwoing his sacking from Everton on Wednesday, there have been calls from sections of supporters to install him in place of Heckingbottom. Leeds will be going all out next season in their attempt to make it back into the Premier League so Andrea Radrizzani has a big decision to make as to whether to continue with the Yorkshireman or to cut his losses and go with a more experienced head. We think the latter, so expect the axe to come down on the manager at some point in the near future.

In other Leeds United news, Points to Heck going, PH won’t be here after summer – Leeds fans react to news of done deal. 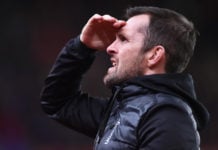