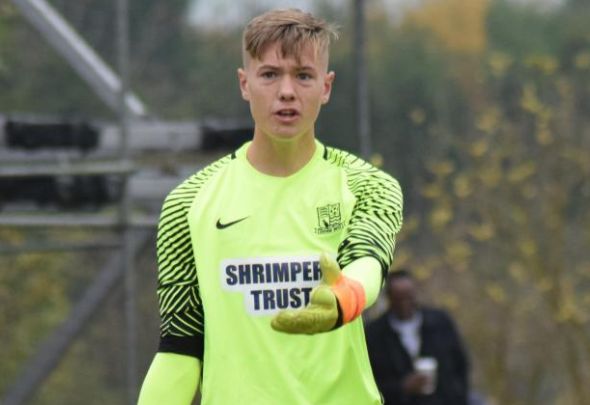 Southend teenager Nathan Bishop has been given the green light to train with Tottenham, according to a reliable journalist.

Southend Echo reporter Chris Phillips has revealed on his personal Twitter account that the 17-year-old goalkeeper has been invited to practise at the North London giants.

It is not said whether Spurs are looking at the emerging star with a view to signing him.

Talented Blues goalkeeper Nathan Bishop has been training with Tottenham.

Starring in Southend’s youth side, Bishop has caught the attention of Tottenham as they look to cast their eye over the young stopper at the Enfield Training Centre.

Yet to earn a senior appearance with Phil Brown’s Southend, Bishop has impressed in the Shrimpers’ Under-18’s side after a run of good form in the EFL Youth Alliance South East Conference.

His performances between the sticks has seen Southend’s youngsters reach second place in the league behind Leyton Orient, winning 11 of their 20 matches.

Now, Bishop’s impressive form has handed him a chance to impress on the training ground with the Premier League title contenders.

Along with Hugo Lloris, Pau Lopez and Michel Vorm, Spurs also have a highly-rated goalkeeper in Luke McGee, who is currently on loan with Southend’s League One rivals Peterborough.

Southend currently have two goalkeepers in Mark Oxley and Ted Smith, but Bishop’s growing reputation could see him break into the first team in the near future.

With back-up goalkeepers Michel Vorm and Pau Lopez’s future at Tottenham in doubt, Pochettino could be set to move to bring in the talented youngster in order to offer future back-up to undisputed first-choice goalkeeper Hugo Lloris. Former Swansea stopper Vorm has less than 18 months remaining on his current contract, while Lopez is only on loan from La Liga outfit Espanyol until the end of the season. At such a young age, Bishop has his whole career ahead of him and could prove to Pochettino that he is deserving of a Tottenham contract with his stock only set to rise as he continues to show an ability way beyond his years.

In other Tottenham transfer news, this Spurs striker has made a decision after reported interest.