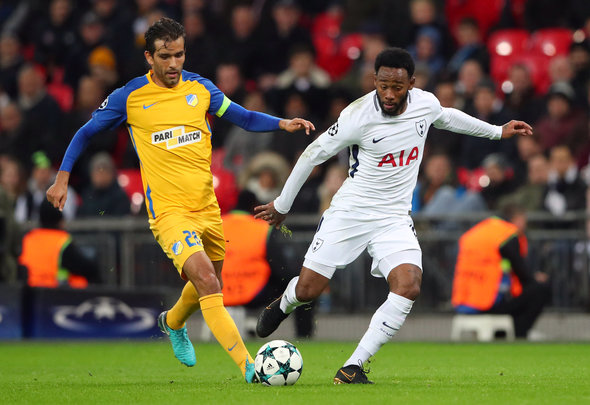 COMMENT
Tottenham are making a huge transfer mistake in shipping Georges-Kevin Nkoudou out on loan when they should be seeking his permanent exit in January.
French publication L’Equipe have claimed on their website that Spurs are set to allow the 22-year-old winger to join fellow Premier League side Burnley for the remainder of the season, after struggling to impose himself on the first team squad this season.
It is said that there were a whole host of sides from across Europe interested in snapping up the speed machine, but Mauricio Pochettino has made a mistake by not offloading him on a permanent basis.
Signed from Olympique Marseille back in 2016 for a fee in the region of £11million, he has failed to live up to standards at the north London club, with just 23 appearances under his belt for the first team.
This season has seen him turn out just six times, one of those coming in the starting XI, and he has racked up a total of one minute of league action, with his attributes not fitting the style of play employed by the manager.
Furthermore, L’Equipe claim that Pochettino’s intense workout drills have left the youngster exhausted, but if he cannot deal with the Argentine’s methods there is no reason for him to remain at the club, considering the manager looks to be staying long-term.
Spurs are said to be expecting a quiet January transfer window, but with a top four place in the Premier League at stake, not to mention their Champions League and FA Cup campaigns, they really should be splashing the cash to reinforce their push for success.
Nkoudou represented the perfect opportunity to raise some immediate transfer funds and considering the vast amount of interest in his services, Tottenham could well have initiated a bidding war, making suitors pay above and beyond what he is actually worth.
That interest may not be around forever, yet the club have instead allowed him to depart on loan, missing out on the opportunity of his current value despite having never showed the ability to succeed with Spurs.
It is a huge mistake, and Pochettino’s show of faith could well come back round and bite the club.
In other Tottenham news, the club have been handed a boost after one man’s official injury update.