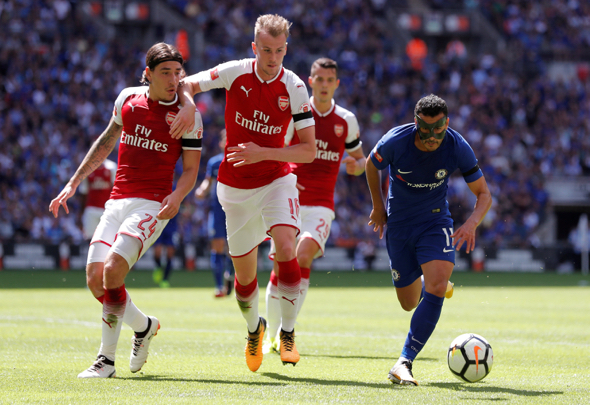 Arsenal are looking to double their current kit sponsorship deal, according to a report.

The Sun claim that Arsenal are currently in a £30million-a-season deal with Puma, and have two years remaining.

Now they’re looking to receive as much as Premier League rivals Chelsea by switching to Adidas.

The Puma deal is worth £150million over five years and the north London club currently have two years left on the deal.

When they signed the deal in 2014 it was a huge amount of money but as Premier League money continues to grow, it is now much less than their league rivals.

According to The Sun, Chelsea have a deal with Nike which is worth £60million-a-year over 15 years – an astonishing £900million in total.

Chelsea were with Adidas before switching to Nike and Adidas now want to secure themselves another major London club after already doing  a deal with Arsenal’s bitter rivals Tottenham.

Despite having two years left with Puma there is talk that Arsenal could buy out of their current deal.

The new Puma shirts have already seen Arsenal lift their first trophy of the season as the Gunners beat their Nike-clad rivals in the Community Shield.

Chelsea went a goal up after Victor Moses drilled the ball home after Arsenal failed to deal with a corner.

But, after Pedro was sent off for a late challenge on Mohamed Elneny, new boy Sead Kolasinac powered home a header to take the match to penalties.

Arsenal didn’t miss a single spot kick, unlike Thibaut Cortois and Alavaro Morata, and Wenger was left holding what he is hoping will be just his first piece of silverware of the upcoming season.

In other Arsenal news, the Gunners get a boost as star commits future to Emirates after win v Chelsea.