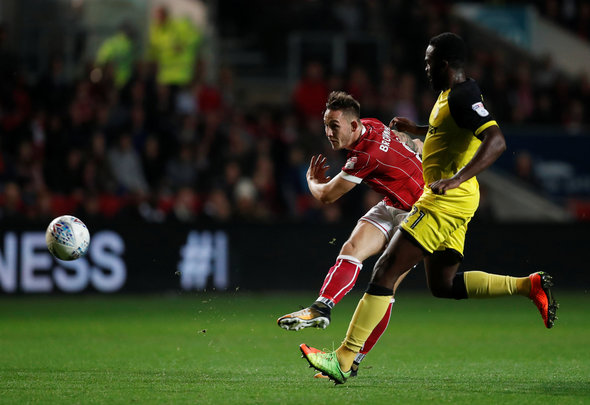 Leeds United are said to be interested in Bristol City midfielder Josh Brownhill, but the player is happy to stay at Ashton Gate, according to a report.
The Bristol Post claims that Brownhill, 22, is not looking for a move away from the Robins despite reports of interest from Elland Road.
Even though the right winger signed a new contract in December that saw him commit his future to Bristol City until 2012, the Sun [print edition, February 17, page 60] claimed that Paul Heckingbottom is a big fan of him and is keen on making a move in the summer.
TeamTalk reported before Christmas that Leeds, Derby, Bournemouth, Leicester, Burnley and Newcastle were all keeping close tabs on Brownhill after an impressive first half of the season at Ashton Gate.
But now in this latest development, it appears that Brownhill is not looking to move away from the Robins just yet despite previously working with Heckingbottom at Barnsley earlier in his career.
The right-sided flyer has made 37 appearances in all competitions for Bristol City this season, scoring three goals and supplying three assists.
Football Insider verdict
It would not be a surprise to see Leeds starting to make plans for the summer now. Their hopes of achieving promotion have taken a heavy blow over the past few months and it seems that they are destined for a mid-table finish in the Championship. Brownhill is a decent player and would be a good signing at Elland Road, but it seems he is committed to Bristol City. He signed a new contract in December despite the reported interest from Premier League clubs, so it is clear that he is happy to remain a part of Lee Johnson’s squad for the time being. Brownhill is still young though so who knows what the future will hold for him.
In other Leeds United news, fans have raged at Andrea Radrizzani and Victor Orta after a development in the hunt to sign this centre-forward.