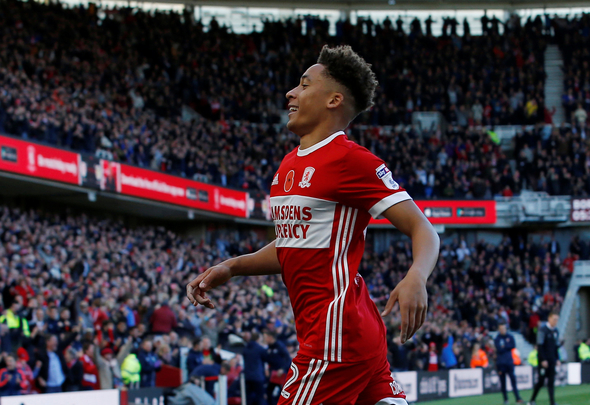 Everton are considering making a bid for Middlesbrough’s Marcus Tavernier in January as they continue to monitor the 18-year-old’s development, according to a report.

The Daily Mail report that the Toffees will face competition for the left winger from Arsenal as they decide whether to pursue their interest further.

The 18-year-old has gained attention after breaking into Middlesbrough’s first team in recent weeks, making three appearances in the Championship, and has reportedly impressed scouts.

The young midfielder even scored a goal in his last league appearance, netting the winner against Sunderland.

Tavernier, who can also operate as a defensive midfielder, has also featured three times for Middlesbrough in the League Cup, where he grabbed a goal against Bournemouth.

The midfielder’s recent performance earned him international caps for the England U-19s as he played against Faroe Island, Iceland and Bulgaria during the recent international break.

Also of note to Everton, the 18-year-old’s current contract is due to expire in the summer but Middlesbrough do have an option to automatically extend the deal by a year.

It’s difficult to decide whether this would be a good fit for Everton or Tavernier given it’s not known currently who will be the manager of the Toffees in January. If David Unsworth was to still be in charge, then the youngster could even find himself getting Premier League game with a January move, as Unsworth does hand opportunities to youngsters. Despite temptation of Premier League football, the youngster may actually opt to stay with Middlesbrough seeing as he has only just broken into their first team and probably would not be keen on trying to break into another first team so soon. Wherever Tavernier ends up, he does look like a player worth keeping an eye on.

In other Everton transfer news, the Toffees have struck a midfielder agreement with this English club.