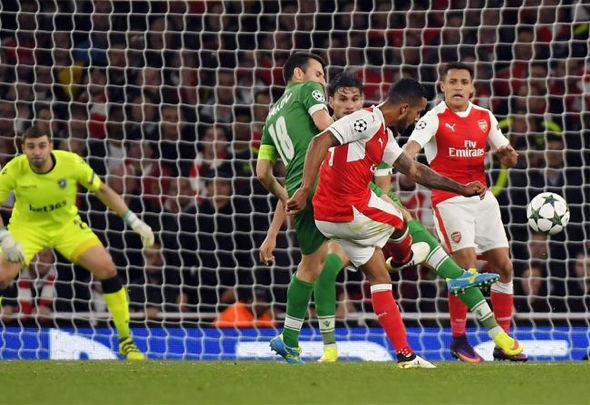 Everton are on the verge of securing a transfer deal for Arsenal’s Theo Walcott after he successfully passed his medical with the club, according to a report.
The Daily Mail claim on their website that the Toffees have agreed a multi-million pound fee for the attacker, said to be in the region of £20million, and that a move to the north west is all set to go through following the final crucial stage of the transfer.
Walcott, 28, has been out of favour at the Gunners this season, with just six substitute appearances in the Premier League contributing to his total of 16 outings across all competitions, scoring four goals and chipping in with five assists.
The Arsenal forward looks set to leave the club just one appearance short of a milestone of 400 games, while he also has 47 England caps under his belt.
Football Insider verdict
Walcott’s exit always looked likely after Arsene Wenger showed evident favour towards other members of the squad this season, while his contract situation also pointed towards a departure. Everton are getting their hands on a talented forward who has always failed to demonstrate the consistency desired by the Gunners, but at Goodison Park, under Sam Allardyce, he has the chance for a fresh start. Arsenal meanwhile get their hands on some spending money for Wenger, who may look to reinvest immediately to boost their push for a top four spot this season. This seems like the best move for all parties involved, although Everton may now be looking to offload some of their current squad, which is beginning to look a bit bloated.
In other Everton transfer news, the Toffees are favourites to sign this £65,000-a-week Premier League centre-forward.
We’ve launched a << BREAKING NEWS FEED>> exclusively for your club. ‘Like Us’ on Facebook by clicking here if you want 24/7 updates on all Everton breaking news.