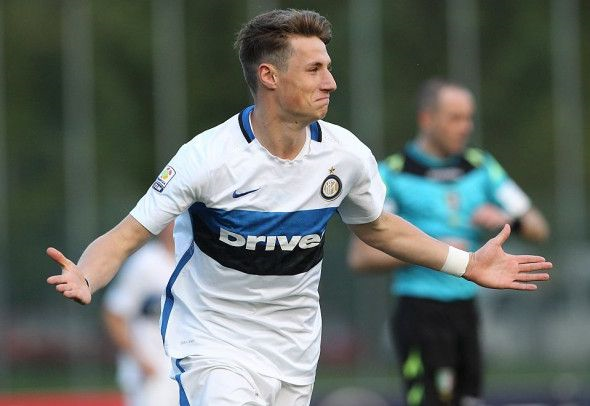 Liverpool have been named alongside Wolverhampton Wanderers in the pursuit of Inter Milan forward Andre Pinamonti, according to a report.

The Sun details that the 18-year-old starlet, whom they call a “teen sensation” is a wanted man, and is considering his future at the San Siro after finding first-team opportunities hard to come by.

Pinamonti only agreed terms to stay on at the club last summer and is under contract until 2021, and it is reported that he would cost as much as £2million, despite making just two senior appearances and still waiting for his first goal.

The youngster has six goals in six appearances in the UEFA Youth League, as well as three assists but has been handed just 13 minutes of football in Serie A. It’s a move that would be reminiscent of Philippe Coutinho’s own arrival at Anfield, after the Brazilian joined the Reds from the Nerazzurri back in 2013. Liverpool are already set to lose out once to Wolves with Nuno Espirito Santo said to be beating the Reds to the signature of Stoke City keeper Jack Butland. However, Jurgen Klopp will not want to see the newly promoted Championship side get one up on them on too many occasions. The German manager has already shown his faith in the kids, promoting Andy Robertson and Trent Alexander-Arnold into the first team this season, which will undoubtedly have been noted by the Inter forward who is thought to be keen to progress his career. It’s unlikely he’d be one to immediately go into the side – Klopp will be more likely to give the striker a bit-part role in the senior side.