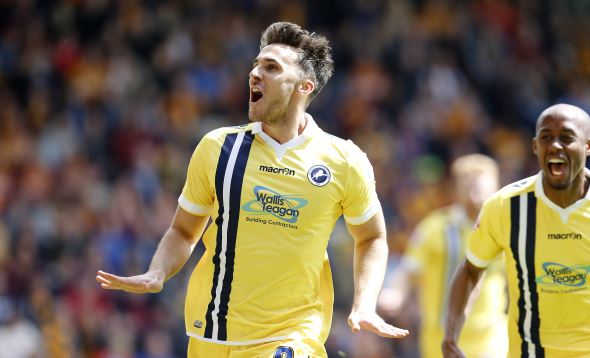 Milwall’s 26-goal striker Lee Gregory is being monitored by Championship rivals Sheffield Wednesday and Hull, according to a report.

The Yorkshire and Humberside clubs are vying for promotion to the Premier League ahead of their Championship Play-off Final clash this Saturday, yet both have already started looking to build for next season.

According to the Coventry Telegraph, prolific front man Gregory is on the radar of the two clubs as well as Brighton.

However, their chances of signing the 27-year-old could rely on the outcome of Milwall’s own play-off final.

The League One side face Barnsley at Wembley on Sunday and defeat would ensure the Lions face a hard task in convincing the club’s top goalscorer to stay amid strong interest from England’s second tier.

Gregory might even bypass the Championship altogether if Wednesday win promotion and wish to bring his firepower with them into England’s top flight.

The 27-year-old spent his youth career at Wednesday’s rivals Sheffield United but he may have to put old allegiances aside in order to climb the Football League ladder, unless the Lions outmatch Barnsley this weekend.

That Milwall made the final is owed largely to the 24 goals Gregory has been involved in over the course of this season, having scored 18 and assisted four in the regular campaign before adding another two goals in the 4-2 semi-final aggregate win over Bradford City.

Gregory will be desperate to add to his 26 goals in all competitions this weekend in a bid to secure Championship promotion. However, he will be hard pressed to surpass the 31 strikes notched in 40 appearances for Halifax Town before the move to his current club.

The 27-year-old will nonetheless be hoping to emulate former Halifax frontman Jamie Vardy in his meteoric rise up Europe’s most competitive league.

In other Yorkshire football news, Leeds United set their sights on a Premier League defender.