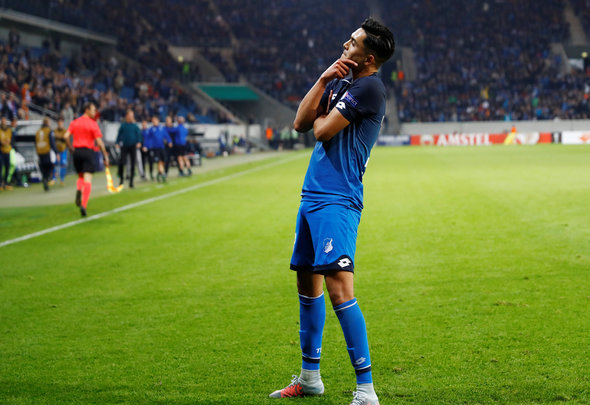 English trio Tottenham, Manchester United and Arsenal are in hot pursuit of Hoffenheim’s attacking midfielder Nadiem Amiri after impressing in recent seasons, according to a report.

ESPN FC claim on their website that the 21-year-old has become something of a youth sensation in the Bundesliga with his performances, and has been tipped to break into the German national team after turning out for every age group from the under-18s.

The central attacking midfielder, who is versatile enough to play on either wing, has already made 86 appearances for his club, with 10 goals under his belt across all competitions, which has reportedly led to the likes of Spurs, United and the Gunners keeping tabs on him.

Four of his strikes have come in the current campaign, having established himself as a regular in the starting XI for Hoffenheim, where he is contracted until 2020.

The youngster has been compared to fellow 21-year-old and current Spurs star Dele Alli for his style of play, and it could be that the two are fighting for a place at the club if they choose to swoop for the German.

Amiri seems like he has what it takes to reach the very top if his performances for his club are anything to go by, while the prospect of a call up to the senior Germany side will be exciting for both the player and his club. Hoffenheim will know that an international cap will only add value to his price tag, while may help convince the player he is at the right place to achieve his aspirations, despite the English giants sniffing around. Will he fit in at Spurs? There is every chance that Dele Alli could well be on his way in the future, and it seems as though Amiri could be his replacement. If Alli does not leave, then the added competition ought to bring the best out of both players, so it seems a smart move to make.

In other Tottenham transfer news, Daniel Levy has left the door open for a sensational piece of transfer business.