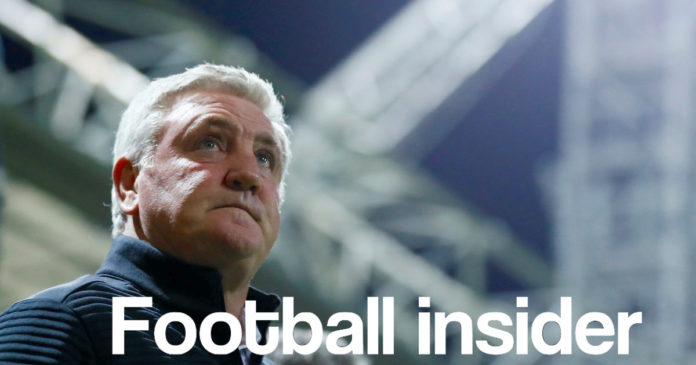 Aston Villa will be forced to rely on freebies and loan deals in this summer’s transfer market if they fail to win promotion back to the Premier League, Football Insider sources understand.

Villa are currently in fourth place in the Championship and look like they will have to try and win promotion via the play-offs as Cardiff and Fulham battle it out for the second automatic promotion spot alongside confirmed Wolves.

Villa were restriced to loan deals and free agents in the January transfer window due to Financial Fair Play restrictions and those restrictions will continue to apply next season if Villa fail to win promotion out of the Championship.

Villa boss Steve Bruce would have money to spend if the club are successful in winning promotion back to the Premier League, but he will face further transfer frustration if the club remain in the Championship next season.

A well-placed source has told Football Insider that Villa’s scouting and recruitment team are drawing up two different list of targets depending on them winning promotion or staying in the Championship.

Villa spent heavily in 2015 and 2016 during the transfer windows and that has resulted in them being on the brink of breaching FFP rules.

Should Villa fail to win promotion this season it will lead to fears that a number of stars may have to be sold to raise funds to keep the club within the FFP restrictions.

An exodus of leading players would be a bitter pill for fans to swallow if it follows confirmation of another Championship campaign.

In other Aston Villa transfer news, a US winger has agreed to join the Midlands big hitters after terms finalised.