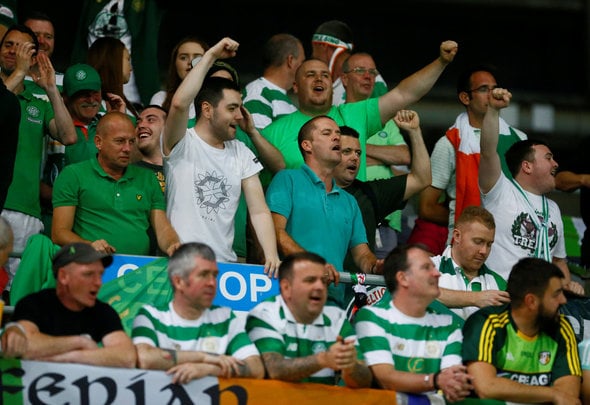 Celtic fans on social media were unimpressed with Moussa Dembele’s performance in the 2-1 win over Hamilton.

The 21-year-old missed a golden chance to give the Hoops the lead in the opening seconds of the game, but his shot was straight at Hamilton goalkeeper Ryan Fulton and the chance was gone.

The miss set the tone for the Frenchman’s performance for the rest of the game, and it will have come as no surprise to supporters when he was replaced by Odsonne Edouard in the second-half.

One fan was so unimpressed with the striker that he claimed that he had been ‘rotten all season’.

Here are some of the best reactions to Dembele’s performance from Twitter:

We're playing with 10 men,with Dembele ! Get him off ! Get Super Leigh on !

No coincidence sinclair got more involved in the game when griffiths came on, LG is a livewire constantly makes runs & pulls defenders all over the gaff allowing our wide players space to come in, Dembele is totally static hes easy for defences to deal with & keep their shape.

Job done,but that was a tough https://t.co/ezpkwGtcPX pedestrian yet again,especially against 10 men for so long.We need to play Griffiths from the start every week now.Dembele was an empty Jersey again.

The Frenchman has had an up and down season, scoring 13 goals but failing to hit the heights he sent last season, where he hit 32 goals and was a revelation in his first season in Scotland.

He was excellent in the recent 3-2 win over Rangers at Ibrox, scoring a goal and setting up Edouard’s winning goal, but he has failed to impress in recent games against Dundee and Hamilton.

Brendan Rodgers will have a big choice to make concerning Dembele and the upcoming Scottish Cup semi-final, as Leigh Griffiths’ performance against Hamilton –  the substitute having scored the winning goal – has moved him firmly into contention for a starting place for the match against the Hoops’ bitter rivals.

In other Celtic news, read the player ratings for the Hoops v Hamilton