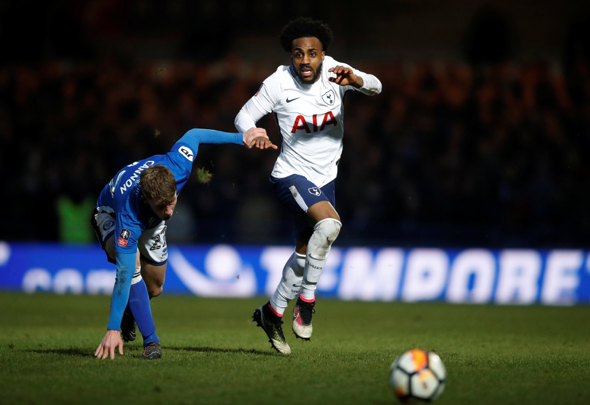 Danny Rose paid tribute to his former teammate Ryan Mason in the FA Cup clash with Rochdale today.
The match ended 2-2 after late drama, but Tottenham thought they’d won it when Harry Kane dispatched a penalty in the 88th minute.
However it wasn’t enough as Steve Davies popped up with a dramatic equaliser in the 93rd minute to take the tie to a replay at Wembley.
When Kane scored the penalty Danny Rose paid tribute to Mason, who was forced to retire early after a collision with Chelsea’ Gary Cahill.
Rose grabbed the camera, screamed Ryan Mason at the screen and kissed the lens twice.
And Ryan Mason, watching the game, responded on Twitter with a simple “Rosey” and two blue hearts.

It was a classy gesture by Rose that was appreciated by Tottenham fans, and other supporters watching the game.
Earlier, manager Mauricio Pochettino had potentially opened the door to Mason going back to Tottenham in a coaching capacity.
In other Tottenham news, Alan Sugar trashes Tottenham star on Twitter after shocker v Rochdale
Don’t miss out on breaking and exclusive Tottenham news by clicking here for our brilliant 24/7 updates on Facebook, Instagram and YouTube.