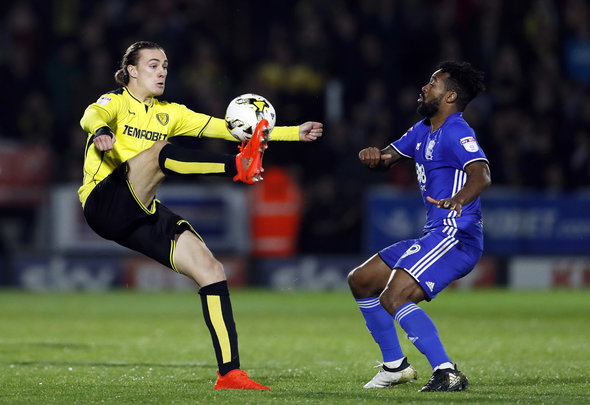 Nottingham Forest travel to Burton on Saturday for a Championship match and will be looking to bounce back from their 3-2 defeat to Brentford.

Gary Brazil’s side are just five points above the relegation places and will be keen to steer away from the dropzone as quickly as possible.

Meanwhile, Burton are also hovering just above the relegation places and will equally be desperate for the points at the weekend.

Here, Football Insider delivers an insight into Forest’s latest opponents and the three players they should watch out for.

Jackson Irvine has arguably been Burton’s standout player this season and is set to be a huge test for Forest. The 24-year-old is enjoying a great first season in English football and has settled smoothly following his summer arrival from Ross County. The midfielder is defensively-minded by trade and is well recognised for breaking up play in the centre. He has also added another dimension to his game this season and been handy in front of goal. Irvine is Burton’s top scorer with nine goals across all competitions and has shown a great desire to push forward.

Burton have managed just 35 goals in their 36 league games so far this season and do lack attacking creativity, but Dyer is certainly one of their most effective players. The left winger still has great pace at the age of 34 and can be very difficult to face on his day. He is an experienced campaigner in the Championship, having made 282 appearances in England’s second division during this career for several clubs. He has managed five goals and supplied three assists this season, so will be a player Forest will need to be looking to nullify.

Burton winger Michael Kightly could make his return from injury at the weekend, something that would be a massive boost for the home side. The 31-year-old moved to the Pirelli Stadium on loan in January from February and made a fantastic start. He scored three goals in his first four games for the club before picking up an injury. Kightly certainly looks a top player in the Championship and Forest may have to double up on the tricky wide man if he starts.

In other Nottingham Forest news, Matty Cash has revealed he is fighting to keep his place ahead of the club’s young sensation.