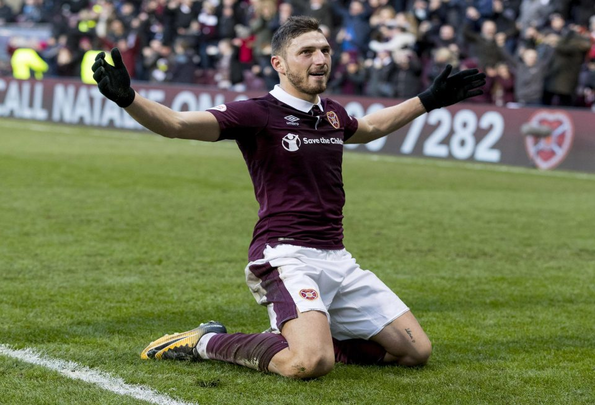 Despite being the top scorers in the Scottish Premiership last season, Rangers at times seemed to get a bit loss in certain areas of the pitch.

They were far too reliant on Josh Windass and Alfredo Morelos, and when they didn’t score the team didn’t score, with goals lacking from other areas of the park.

The Jason Cummings move wasn’t much of a success, and the Gers have yet to decide if to bring him back to Ibrox on a permanent deal.

So Steven Gerarrd and Mark Allen will be looking for new additions to the Gers attacking threat, and one player they should be considering is Geona left-midfielder David Milinkovic.

The 24-year-old spent last season on-loan at Hearts and was a success for the Tynecastle club, scoring six goals in 24 appearances.

He was very consistent for the Tynecastle side, memorably scoring twice in the 4-0 win over Celtic in December.

He is available to buy, as the Edinburgh Evening News are reporting that the Seria A side want £600,000 for him, and Hearts and sides in France and Italy are interested in the winger.

Director of football Allen seems to have identified targets who have experience of playing in Scotland since starting his job at Ibrox, and Milinkovic certainly fits the bill.

He wouldn’t cost a lot of money and would be a useful squad player for the Gers to have as they aim to get back to the top of Scottish football.

In other Rangers news, Lee McCulloch has discussed what would be a successful season for Steven Gerrard