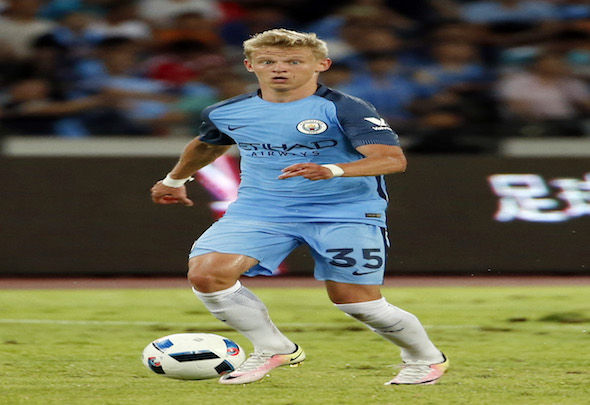 Italian outfit Napoli are interested in signing Manchester City midfielder Oleksandr Zinchenko on loan this summer, according to a report.

The Mirror claim on the live transfer blog on their website (Saturday, 13:39) that the Serie A side have made a move for the 20-year-old as they believe that he will be the perfect candidate to replace the outgoing Emanuele Giaccherini.

The newspaper clams that Giaccherini is set to join Czech side Sparta Prague in the transfer window.

The report claims that Napoli are confident that they can lure the youngster to Italy this summer as they can offer him a chance to play Champions League football next season.

The Serie A side impressed in last year’s competition but they were knocked out in the knockout stages by eventual winners Real Madrid.

It is said that the Manchester club are hopeful that the midfielder can gain more experience under his belt in a tough and competitive league next season.

Zinchenko was sent out on loan to Dutch side PSV Eindhoven last season where he impressed with his performances, producing 13 assists in all competitions.

The youngster has already demonstrated that he can deliver the goods on the international stage, making a total of 10 appearances for the Ukraine national team.

The midfielder represented his country in last year’s European Championships in France and featured in every single match.

Zinchenko’s current contract at the Etihad Stadium runs out in 2021.

Zinchenko has managed to gain so much experience at such a young age both at club and international level. With Manchester City desperate to bring win some silverware next season, the club have spent millions this summer as they have signed exciting young talent which will mean that the Ukrainian will not be guaranteed first-team football at the Etihad Stadium next season. A move to Napoli would be highly beneficial for both parties as the Italians play attractive football and the youngster will be able to compete against some of the most historic teams in the world such as Juventus and the Milan sides. If Zinchenko proves he can deliver in Serie A next season, City boss Pep Guadiola will be forced to consider him as a first-team option in the near-future.

In other Manchester City transfer news, manager Pep Guardiola is considering a summer move for this defensive duo.