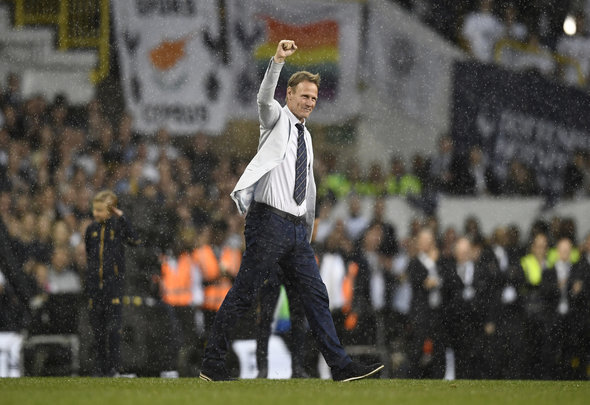 Former Tottenham striker Teddy Sheringham has backed the club as one of the potential winners of this season’s Champions League.

Spurs have so far gone unbeaten in Europe’s premier club competition, despite being drawn in a group with current holders Real Madrid and German giants Borussia Dortmund.

Mauricio Pochettino and his men have won four of their five matches so far, with impressive 3-1 wins over both Real and Dortmund at Wembley.

Their unbeaten record means they have already secured their place in the knock out rounds as winners of the group, despite still having to play Apoel Nicosia in their final group game this week.

Now Sheringham says that he believes that an English side could well be tasting European glory at the end of the season, and names Spurs as contenders for one of the biggest prizes in club football, with superstar duo Harry Kane and Dele Alli identified as key figures to their success.

With Manchester City, Chelsea, Spurs, Liverpool and Manchester United all in with a shout, he told the Mirror: “I can see one of that lot winning the Champions League.

“Tottenham drew away with Real Madrid and beat them at home. Not bad, is it?

“They now have a year’s experience in the Champions League and that is showing.

“They look more accomplished this season and they have match-winners like Dele Alli and Harry Kane.”

Spurs have already improved on their European displays of last season, which saw them finish third in their Champions League group before tumbling out of the Europa League with a two-legged defeat to Belgian side Gent.

In other Tottenham news, the club are in the hunt to snap up a 20-year-old international playmaker.