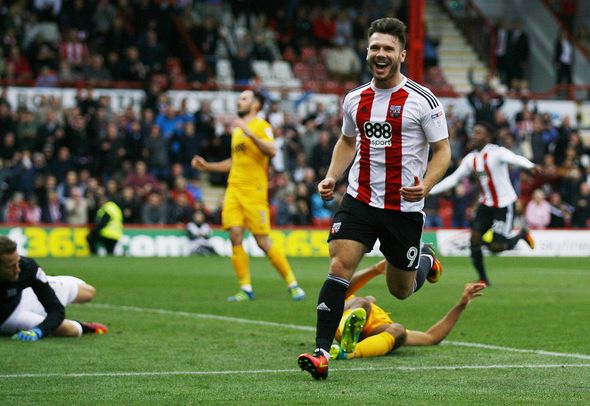 West Ham could secure the signing of Brentford striker Scott Hogan in the next 48 hours, according to a Sky journalist.

The Hammers have been linked heavily with the 24-year-old goalscorer in January and Bees manager Dean Smith told reporters at the weekend that he expects a further bid from the Premier League side.

Now, Kaveh Solhekol, who works for Sky Sports, has revealed on his personal Twitter account on Sunday evening that there is growing confidence that a deal can be done.

Growing confidence Scott Hogan will move from Brentford to West Ham this week. One camp think deal may be done within 48 hours #WHUFC

Hogan was left out of the 18-man Brentford squad which suffered a 2-1 defeat against Wigan at the weekend.

However, he has starred in 26 encounters for the second tier side this campaign, bringing an impressive return of 14 goals.

West Ham have struggled going forward at times this season with summer striker signings Ashley Fletcher, Andre Ayew, Jonathan Calleri and Simone Zaza all failing to make an impact in the side for various reasons.

The recent return of Andy Carroll from a long-term injury has helped the Hammers someway going forward.

But, Slaven Bilic still believes his side needs more numbers in the striker department and will hope that Hogan, who’s contract expires in the summer can prove a worthy addition.

The eventual end of this long drawn out transfer saga will be a huge relief to the West Ham faithful. However, some supporters may argue that their side needs a bigger name. The Hammers were linked with moves for Carlos Bacca, Alexandre Lacazette and Michy Batshuayi in the summer and Hogan is a clear level below those names. But, one thing Hogan does bring to the side that the others don’t is potential. At 24 the player still has time to grow and form into a top flight striker and his goal tally would indicate that he can make the step up and become the answer to West Ham’s current problems. Bilic must now ensure that he can secure the signing of the up and coming player.

In other West Ham transfer news, the Hammers have signed this attacker on a three-and-a-half year deal.