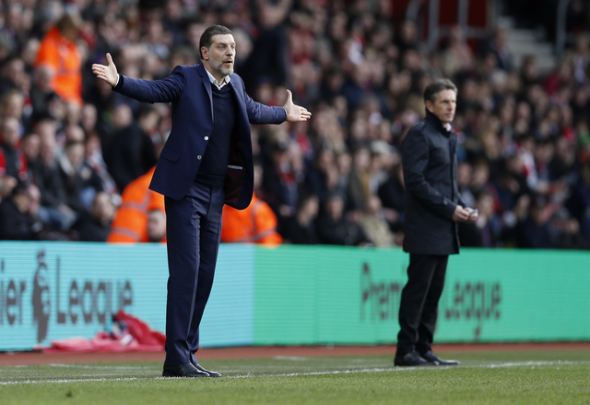 Slaven Bilic has revealed that three of his West Ham stars have failed to train this week ahead of Saturday’s clash against West Brom.

The former Croatia manager revealed that Andy Carroll, Aaron Cresswell and Cheikhou Kouyate have all sat out from this week’s training sessions.

Bilic was quoted by West Ham’s official Twitter account ahead of Saturday’s clash at the London Stadium as saying that all three are now doubtful to face Tony Pulis’s Baggies.

“A few players have not trained like Cresswell, Carroll and Kouyate but we will wait and see tomorrow,” Bilic revealed in his Hammers press conference.

SB: "A few players have not trained like Cresswell, Carroll and Kouyate but we will wait and see tomorrow.

England international Carroll limped off the field against Southampton last Saturday with a minor groin injury in the 56th minute.

With that in mind, the former Liverpool and Newcastle striker could be rested in order to avoid a serious long-term injury, which has tormented the target man throughout his career.

The potential return of Frenchman Arthur Masuaku could come at just the right time after the London Evening Standard claimed he was returning to training on Friday.

His return could see him replace former Ipswich left-back Cresswell, who has failed to train this week following Saturday’s 3-1 win over Southampton.

If the Hammers are forced to go without Kouyate, who played at right-back against the Saints, then Byram can come back in to the side.

Carroll has been in wonderful form for the Hammers, sparking a resurgence in the Premier League which has seen them go from the lower depths of the division to ninth. Scoring four goals in as many games, the target man has even warranted talk of and England call up, with Gareth Southgate set to run his eye over West Ham’s number nine. Keeping him in the side, then, is vital and he should be risked even if he is not fully fit. Cresswell gets the best out of Carroll with his inch-perfect crossing, and will also be watched by Southgate. Keeping him in the side is also crucial. However, Kouyate’s exclusion would not be deemed as important and with Byram returning to fitness, the out-of-position right-back could be rested by Bilic.

In other West Ham news, the Hammers must offer this 24-year-old a new contract.