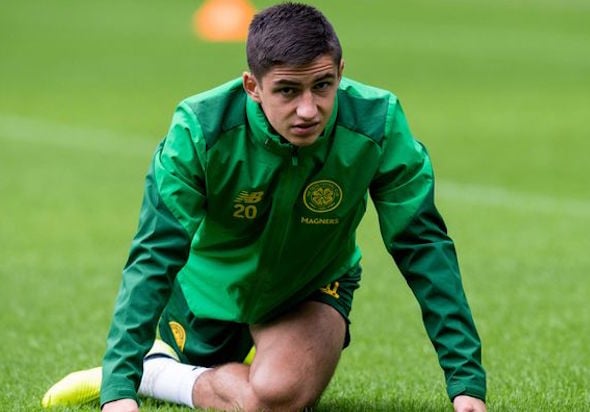 Neil Lennon does not believe Marian Shved is ready for a major Celtic role but has been increasingly impressed by his efforts in training, Football Insider has learned.

The Ukraine international, 22, has made just two appearances for the Hoops since joining in the summer despite scoring on his debut.

A Celtic source has told Football Insider that Lennon believes Shved still needs more time to acclimatise to the Scottish game and the intensity of the team’s playing style.

The absence of left-winger Mohamed Elyounoussi for the upcoming matches against Livingston and Rennes, and possibly Ross County as well, opens up a place for a wide attacking role in the starting XI.

Shved was handed his second international cap by Ukraine when coming off the bench against Estonia during the international break.

He was also pictured in first-team training at Celtic’s Lennoxtown headquarters today, wrapped up in a snood and tights to keep out the cold.

But Lennon is more likely to move Ryan Christie across, or push Jonny Hayes further forward, than hand a first start to Shved, during the forthcoming fixtures.

The northern Irishman is excited by the talent of the winger and is convinced he can be a real asset when he is fully adapted.

The Celtic coaching staff have been working behind the scenes at their Lennoxtown headquarters on building up the wide man’s fitness and sharpness, as well as understanding of team play.

Supporters have been miffed they have not seen more of Shved after he marked his Celtic debut in July with a goal in a 2-0 Champions League qualifier triumph against Kalju Nomme.

The forward, who joined Celtic in January for £2million before returning to Kiev-based outfit Karpaty on loan, has subsequently been troubled by niggling injuries as well as acclimatisation issues.

In other Celtic news, it can be REVEALED that the club have set their sights on red-hot striker destined for major transfer.