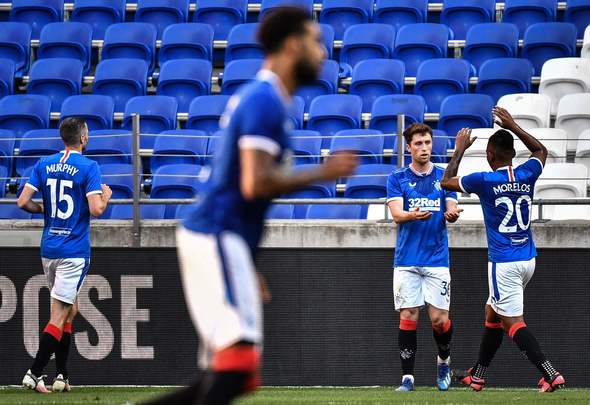 Rangers are set to let Jamie Barjonas go this summer after the collapse of his second move this season, Football Insider has learned.

The midfielder, 22, had been in advanced talks to join second-tier US club Orange County permanently earlier this month but the deal fell through at the eleventh hour.

Barjonas had also come close to joining English League Two side Barrow in the last summer window but that also could not be finalised.

Ibrox sources have told Football Insider that academy product Barjonas is surplus to requirements at Rangers.

He has been told he is not likely to get the offer of a new contract to replace his existing deal that expires at the end of the season.

Barjonas has failed to build on an impressive start to his Rangers career that once suggested he could establish himself in the first team.

The versatile midfielder broke into the Light Blues side when he was 18 and has nine first-team appearances under his belt for the club.

But the Scotland Under-19 international has struggled to make any headway during Steven Gerrard’s reign.

He spent the second half of the 2019-20 campaign on loan at Partick Thistle, where he made five appearances before the season was cut short.

Back at Rangers, he has not had a minute of action this season although he was on the bench for Scottish Premiership matches against Hibernian and Ross County last autumn.

Barjonas has previous loan experience in England for Bury and also had a spell at Raith Rovers when they were in Scottish League One.

In other news, Maguire sheds intriguing light on Gerrard’s relationship with Castore brothers at Rangers.