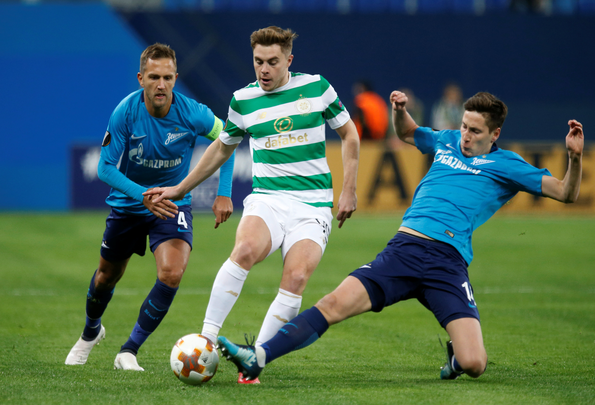 Celtic winger James Forrest has pleaded with manager Brendan Rodgers to remain at the club and help them to reach the next level in Europe.

Rodgers has been linked with a move to Arsenal, with the Daily Mirror reporting that the Hoops senior man is on the shortlist to replace Arsene Wenger.

But Forrest, who is a candidate to be named Scotland’s POTY after an excellent season with the Hoops, hopes that the Northern Irishman stays at the club to make sure that the Hoops ‘push on’.

“You don’t get linked with a job that size unless you are doing well and the gaffer’s been incredible since he’s come in”, Forrest said, as quoted by the Scottish Sun.

“Nobody wants him to go. We want him to stay here and push on. Hopefully that happens.”

Rodgers has had massive success in his two years at the Hoops, and is on the verge of winning a second successive domestic treble.

It’s no surprise that Forrest is so adamant that Rodgers stays at the club, as not only has he given the Hoops huge success, but he has also improved Forrest’s performance since becoming the manager, and Forrest is currently having the best season of his career as a result. Naturally time will tell if Rodgers ends up moving on from Celtic Park sooner rather than later, but whilst he is still at the club he will be looking to push on and make the club perform better in Europe, although that will depend on how much money he is given to spend in the summer, which might affect his future plans.