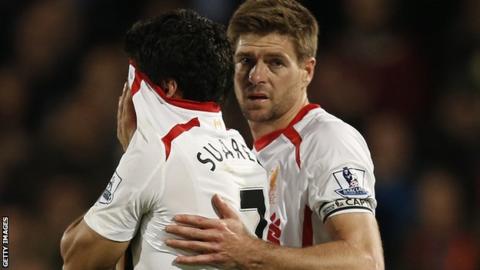 Steven Gerrard has named former Liverpool team-mate Luis Suarez as the best player he ever played with.

Liverpool great Gerrard announced his decision to retire from professional football on Thursday after confirming earlier this month that he was leaving MLS side LA Galaxy.

The 36-year-old is best remembered for his time at Anfield, where he made 710 appearances for the Reds.

He played with some of the biggest names in football during his time at Liverpool and while representing England on 114 occasions.

The central midfielder has played with star names such as Michael Owen, Xabi Alonso, Frank Lampard, Wayne Rooney, Fernando Torres and David Beckham in his career.

Gerrard was confident that current Barcelona star Suarez is the best he ever played alongside when asked the question.

Gerrard played alongside Suarez for three-and-a-half seasons and the pair were so close to leading Liverpool to the Premier League title in the 2013/14 campaign, but were pipped by Manchester City on the final day.

Suarez scored a phenomenal 82 goals in 133 appearances for the Merseyside club and struck up a great relationship with Gerrard.

The 29-year-old has continued to improve with Spanish giants Barcelona, scoring 95 goals in just 113 appearances.

He is now a part of a deadly attack alongside Lionel Messi and Neymar, with the trio firing Barcelona to the La Liga title last season.

In other Liverpool news, the club’s supporters have reacted on Twitter to Gerrard’s retirement.