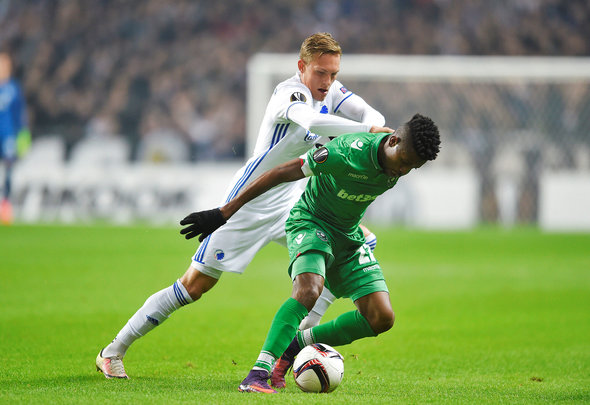 West Ham are set to meet with Ludogorets about signing winger Jonathan Cafu, according to a report.

News outlet Sports Witness claims that the Hammers will probably have to activate the attacker’s £10.2million release clause if they are to land him and will learn of Ludogorets’ demands within the next few days.

However they face stiff competition from newly-promoted Brighton, who are believed to be leading the way to sign the in-demand Brazilian.

Bulgarian news outlet Sportal claimed in November that Aston Villa were interested in the 21-year-old in January, while it was also said that Crystal Palace and Stoke failed in their attempts to sign him.

Now, Premier League champions Leicester and clubs from Italy and Portugal are in a race with the Hammers to strike a deal.

The former Sao Paulo player scored 14 goals and supplied nine assists in 39 appearances across all competitions for Ludogorets this season, whose campaign has already ended.

Cafu’s club lifted the league title after losing just one of their matches.

He caught the eye of many clubs with his impressive displays against Paris St. Germain and Arsenal in the Champions League group stage, in which he scored and supplied a goal in the 3-2 loss to the Gunners.

Cafu usually plays on the right wing but is also a potent force as a striker.

West Ham have to put Leicester and Brighton in their places to get this deal done. Slaven Bilic’s club cannot bow down to teams that have nowhere near the resources they do, and Cafu seems to be a potentially brilliant signing. The Hammers need a goal scorer in the summer because players like Andy Carroll and Diafra Sakho cannot be relied upon to provide the goods for 38 games of a Premier League campaign. Cafu will not bring with him a multitude of top-level experience, but what he does bring is something that the London Stadium crowd is desperate for – goals.

In other West Ham news, Michail Antonio has said who the Hammers need to sign in the summer in order to qualify for Europe.