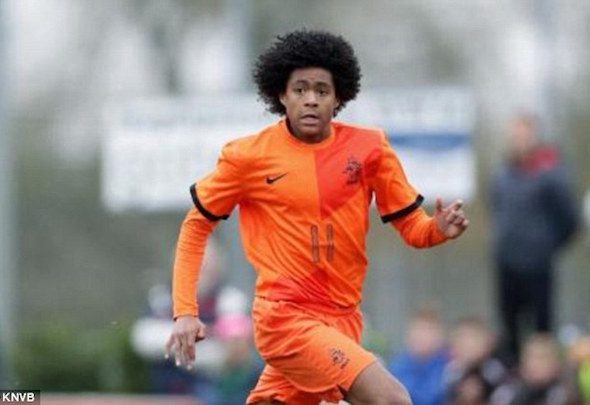 Dutch wonderkid Tahith Chong has confirmed Manchester United are trying to prise him from Feyenoord.

Football Insider revealed last week that the Premier League giants have made a raid for the 16-year-old winger after assessing him in frequent scouting trips in the last 18 months.

A United source has told Football Insider that negotiations have opened with Feyenoord over a deal that would take Chong to Old Trafford in the summer.

But Chong has revealed that he is ready to rebuff interest from United to stay in Holland and sign a new contract with the Dutch club.

“Feyenoord is and remains my first choice and we are still negotiating,” Chong told Fr12.nl. “It’s true that Manchester United are interested in me, but I want to just stay at Feyenoord.

“There is absolutely no question that I’m going out of the club. Feyenoord now is coming up with a plan of how they see me in the coming years at the club.

“I am hopeful that it will be all right and that I’m going to sign a contract with Feyenoord.”

It is a blow to United, whose talent-spotters were impressed with Chong when he played for Feyenoord at the Premier Cup tournament which was held at United’s Carrington training complex last August.

In other Manchester United transfer news, the club are deciding whether to bid for 16-year-old Livingston striker Matthew Knox, who spent last week on trial at Carrington.