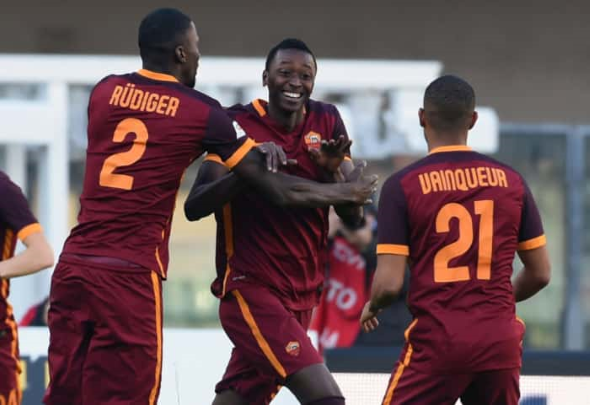 Nigerian striker Umar Sadiq has revealed that he would find it difficult to say no to Steven Gerrard after he was linked with a move to Ibrox – but admitted that he wants to stay at Roma and force his way into the Serie A giants’ side.

According to the Scottish Sun, Gerrard wants to bring the 21-year-old to Ibrox after he impressed on loan with NAC Breda last season.

Roma paid £2million for the Nigerian in 2016 and he scored twice in six Serie A games before in the Eternal City loan spells with Bologna and Torino.

”Few players of my age will say no to working with Gerrard. Rangers are also a traditional team but for the moment I’m happy at Roma and hope to be a part of the team next season. For now, that is my plan, maybe in the future I will get to work with Gerrard,” he told Own Goal Nigeria.

Gerrard badly needs to bring strikers in this summer and it looks as though Sadiq fits the bill for the Gers boss – but it seems the Nigerian would rather fight for his place in Rome. The 21-year-old as a good pedigree and shows that the Light Blues are casting their net further afield and looking to unearth gems from abroad. With the Gers returning for pre-season later this week, Gerrard will surely have been hoping to get at least one striker in before his squad report to the club’s Auchenhowie training base and then travel to Spain a few days later. Although Sadiq has said that he wants to stay in Rome and fight for his place, that decision might be made on his behalf and open the door for a move to Ibrox – although it might be much later in the transfer window before any decision ends up being taken.