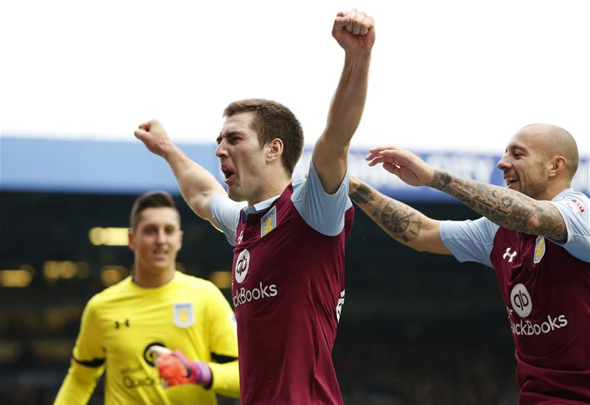 Aston Villa recorded a comfortable win over Sheffield Wednesday in the Championship on Saturday to pick up their fourth win in five games.

Jonathan Kodjia’s double saw a depleted Villa side, who had lost two key players to injury, overcome a wasteful opponent at Villa Park.

However, despite the victory, there were still a few performances of concern for Aston Villa, and here Football Insider reveals the three worst players for the home side.

The midfielder was initially set to begin the game as a substitute, but following the injury to Henri Lansbury in the pre-match warm up, was thrown into the starting eleven at the last minute.

In fairness to Gardner, he did not play that badly, but his midfield partners in Conor Hourihane and Mile Jedinak had a much stronger grip on the game than the 24-year-old.

Gardner was careless and gave away a number of needless fouls, and one of them could have cost Aston Villa had Sheffield Wednesday been less wasteful in the final third.

He doesn’t offer as much as Hourihane or Lansbury do in the Aston Villa side, and that showed against the Owls.

At times he looked the part as a left-winger, with Aston Villa missing their three main options in the position – Jack Grealish, Andre Green and Birkir Bjarnason – but he was also wasteful.

The 23-year-old suffered from a lack of accuracy with his distribution, misplacing and over-hitting a few passes in the final third.

His decision-making could also be improved, but he is not likely to be a permanent fixture in the side in an attacking position, so it was more of a case of adapting to his new role than an outright terrible display.

James Chester and Jedinak were fantastic as a central pairing in the defence, while James Bree and Alan Hutton were both impressive on the right-hand side.

Taylor, meanwhile, was not quite at the same level. Sheffield Wednesday tried to claim a penalty when Taylor brought down Sam Winnall in the box, but it was not given.

It would have been rather harsh on Taylor, but a clumsy moment like that could have turned the game on its head, particularly with Villa just 1-0 up at the time.

In other Aston Villa news, fans have reacted on Twitter as the club a dealt another massive injury blow.