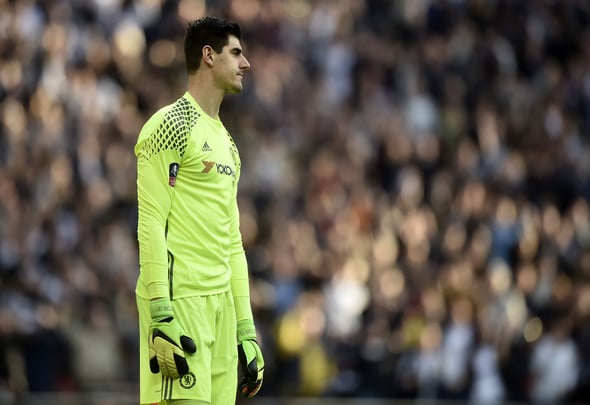 Chelsea goalkeeper Thibaut Coutois has asserted that he is unconcerned by what Tottenham are doing in their bid to win the Premier League title.

The 24-year-old saw his side emerge 3-0 winners at Everton on Sunday to bring themselves closer to league glory, but Spurs didn’t waste any time in responding by easing to a 2-0 win over bitter rivals Arsenal later in the day.

Tottenham now have four games to try and close up the four point gap between themselves and Antonio Conte’s men before the season ends.

Despite turning a blind eye to the pressure that Mauricio Pochettino and his squad have applied on Chelsea so far, Courtois still wants to see their impressive nine-game winning streak in the league come to an end.

“We never look at Tottenham, of course we want them to drop points but the most important thing is to look at ourselves,” he said, as quoted by Chelsea’s official website. “With Southampton at home and Everton away, Tottenham probably thought we would drop points, so to win both games is very significant.

“Now we just have to win our home games, that will be very important.”

The 48-times Belgium international has been ever-present in Chelsea’s campaign, playing in all but one of their Premier League fixtures.

He has made 35 appearances in all competitions for the Blues, conceding 29 goals and keeping an impressive 15 clean sheets.

Chelsea’s shut-out of Everton on Sunday was the first time they haven’t conceded a league goal since their win against Hull in January.

However they’ve still been able to assert their dominance at the top of England’s top flight this season and face a final run of games against Middlesbrough, West Brom, Watford and Sunderland.

In other Tottenham news, a BBC pundit has shared what Spurs must do in the summer transfer window.