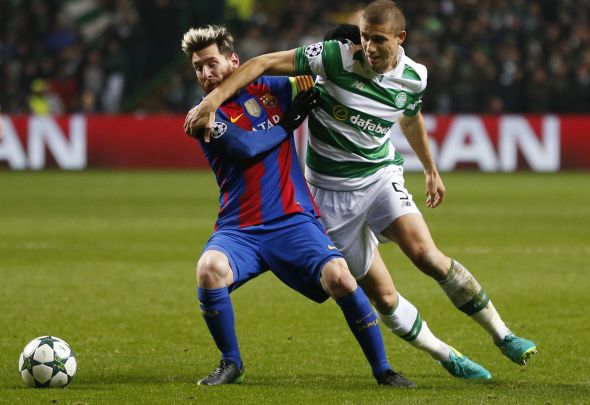 Crystal Palace and Sunderland are considering an eleventh hour move to sign Celtic defender Jozo Simunovic, according to a report.

The Daily Mail claimed in their transfer news blog (January 30, 11.01am) that Newcastle were weighing up a £6million offer earlier in the window.

Now, they say that Premier League duo Sunderland and Palace are set to go head-to-head for the Croatian defender with less than 48 hours remaining before the transfer deadline.

This comes on the back of The Express reporting a possible move from Sunderland for Celtic’s highly-rated left-back Kieran Tierney.

Simunovic, 22, saw a move to Serie A outfit Torino collapse at the last minute in the summer, which would have seen him team up with England goalkeeper Joe Hart.

Remaining in Glasgow, Simunovic has made 20 league and cup appearances for the 47-time Scottish champions this season.

Brendan Rodgers is said to be a big fan of his number five, though, and despite a return to form for Dedryck Boyata, will not want to sell Simunovic.

Both Sunderland and Crystal Palace are in desperate need of additions at the heart of their defence as they look to fire themselves out of a Premier League relegation battle. With both sides shipping over 40 league goals in just 22 matches, Simunovic could be the man to help them plug the gap at the back. However, it must be considered that Simunovic may find it tough in the top tier of English football with the transition from Scottish football to the Premier League considered a large step-up in quality. With Newcastle in talks with Wolves over a possible deal for Grant Hanley, the Toon could also be in the market for a new centre-back. However, the player is highly regarded and Brendan Rodgers is unlikely to entertain the offers.

In other Celtic transfer news, Hoops are in talks to confirm this playmaker deal.