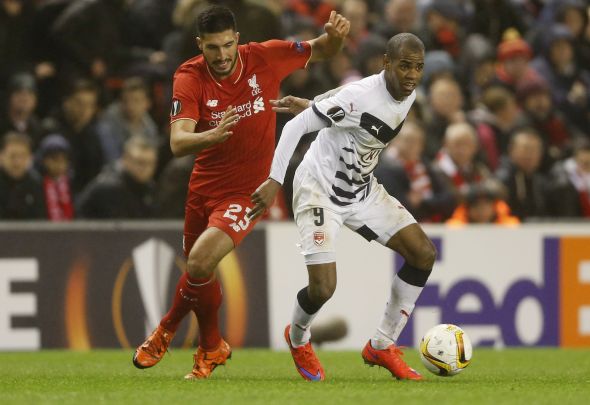 French news outlet Web Girondins reported that the Reds were one of a number of clubs to send their recruitment experts to the Noveaux Stade de Bordeaux to sit through a 1-1 draw.

Former Swansea striker Bafetimbi Gomis scored as European giants Marseille came from a goal down to secure an important point which kept them above Bordeaux in the Ligue 1 standings.

Here, Football Insider analyses which three players that Jurgen Klopp should look to sign from the fixture:

The 24-year-old Bordeaux striker wasted no time in getting his ninth Ligue 1 goal of the campaign when he netted just two minutes into Sunday’s clash. Liverpool have to be on the lookout for a new striker in the summer as they always seem to have an injury crisis in the position. Rolan could prove to be the new Luis Suarez at Anfield as the 24-times Uruguayan international as is a versatile attacker that can be used anywhere across the front three and is known for his rapid pace. He hasn’t exactly been prolific in front of goal, but with the right support from Liverpool’s creative men, he could fire over 15 goals next season if he is signed up.

Although he only signed for Marseille in January, Sanson would be a great addition to Klopp’s central midfield. The former Montpellier playmaker has supplied 14 assists in Ligue 1 this season – no Reds player even comes close to that figure in the Premier League. Sanson has kept up his form at the Stade Velodrome and played all 90 minutes in the draw with Bordeaux. The former France Under-21 international could be a signing for the future but again, Klopp has struggled with injuries in his midfield recently with players like Adam Lallana and Jordan Henderson spending time on the sidelines. Sanson would make a great back-up, or even first-team option.

Supporters of Liverpool would be sent into a frenzy if their club managed to pull off the signing of one of Brazil’s most highly rated youngsters. The right-sided winger has been among the goals and assists for Bordeaux this term and could prove to be the perfect back-up to players like Sadio Mane and Roberto Firmino as he reaches his potential. At just 20-years-of-age, Malcom is one of Ligue 1’s hottest properties and set up Rolan’s opener with his sixth assist of the season. The 13-times Brazil Under-20s international has also found the net nine times in 44 appearances across all competitions. He would be a great investment for the future.

In other Liverpool news, fans react as Anfield favourite retires from the game.