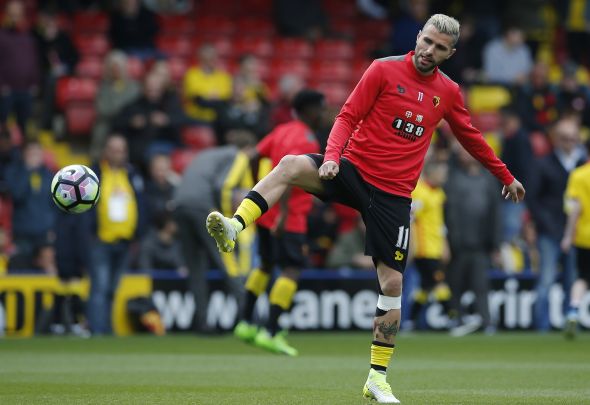 Valon Behrami is reportedly ready to leave Watford in the summer after becoming frustrated with his lack of game-time and West Ham should enter the race for his signature.

Gianluca Di Marzio’s website claims the Switzerland international is interesting Serie A outfit Udinese while a return to his home country with Sion is also possible, after making just seven starts since the turn of the year.

Watford are reportedly keen to keep hold of him for another season, but the lack of game-time has meant Behrami has cut a frustrated figure at Vicarage Park.

The Hammers currently have four central midfielders available to them in captain Mark Noble, Pedro Obiang, Cheikhou Kouyate and Havard Nordtveit. However, Spanish midfielder Obiang remains sidelined with a long-term knee injury while Kouyate and Nordtveit’s performances have been questionable. With the Hammers set for a summer reshuffle under manager Slaven Bilic, Behrami could be brought to the London Stadium and would prove a vast improvement on the current back-up to first choice Noble and Obiang.

Something to prove to Hammers fans

Behrami spent three years in east London, after moving to West Ham for £6.5million before leaving to join Fiorentina for just £2million. He made 62 appearances in all competitions but failed to warm the hearts of Hammers fans during his stay at Upton Park. If brought back to play in claret and blue, Behrami would have the bit between his teeth to prove to Hammers fans that he can prove a success for Slaven Bilic’s side.

With only a year left on his current deal, Mazzarri’s side may be willing to sell the journeyman midfielder in a cut-price deal as they avoid losing him on a free transfer next season. Behrami has proved that he still has what it takes to ply his trade in England’s top tier, making 24 appearances for the Hornets. His measured, disciplined displays in the middle of the park as well as his passing ability would give the Hammers structure during their 2017-18 season.

In other West Ham transfer news, the Hammers have tabled a bid for this Ligue 1 star but face competition from newly-promoted Newcastle.