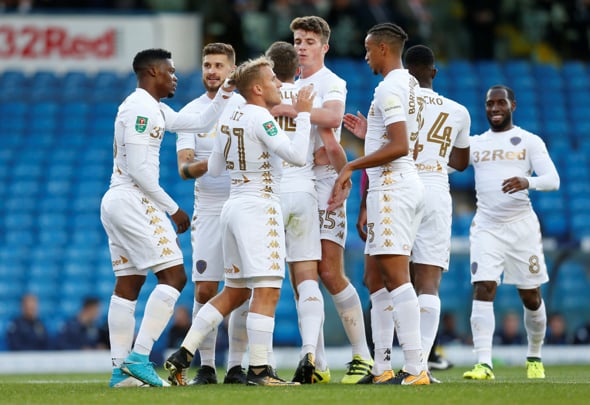 Leeds came through their Carabao Cup first round match against Port Vale emphatically with a 4-1 victory.

Four players made their competitive debuts for Leeds – Caleb Ekuban, Samu Saiz, Cameron Borthwick-Jackson and Mateusz Klich – and it was Saiz who provided the real talking point as he claimed a brilliant hat-trick.

His first was slightly fortuitous, with a cross from Stuart Dallas clearing Rob Lainton in the Port Vale goal, hitting the right post and landing for Saiz to control and smash into the net off the woodwork.

Former Leeds midfielder Michael Tonge scored the goal that brought Port Vale level and threatened to make it a nervy night for the Leeds faithful.

Then Saiz took over, scoring two more goals in quick succession to secure his team passage to the second round. And that’s where we’re starting with the first of our three talking points…

1. Samu Saiz, we will find a brighter day The pint-sized midfielder was the most attacking and exciting player on the pitch. Whenever he got the ball there was a ripple of excitement through the crowd as he put on the after burners and made a beeline for the opposition penalty box. He’s got a great pedigree, coming from the Real Madrid youth ranks and the Ateltico Madrid reserves and the class showed tonight. He was in the right place for the first goal but he didn’t panic, plucking the ball down out of the air and hammering it past Rob Lainton in the Port Vale goal. You might have expected him to score when the ball dropped to him, but it was a smart and confident finish. His second was even better and showed a real touch and eye for goal. We weren’t going to get carried away at this point – he was up against a pretty average team from League 2 – but his hat-trick goal was brilliant and showed he’s got the lot. We’d love to see some of those marauding runs, silky touches and glorious goals in the Championship. A really, really exhilarating debut. We really hope a complaint about unsporting behaviour in the half-time tunnel doesn’t mar his debut.