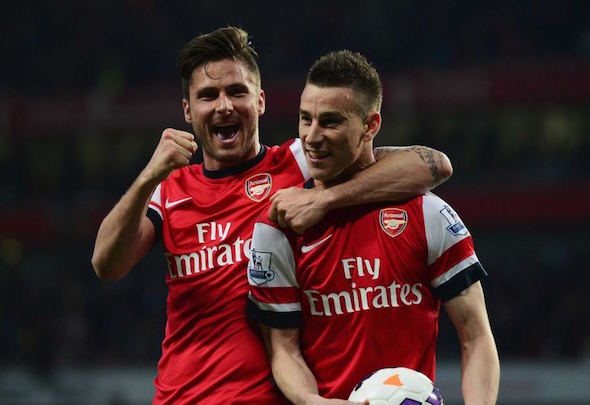 Arsenal were back to their very best in their 4-1 victory away at Stoke on Saturday.

Goals from Olivier Giroud (two), Mesut Ozil and Alexis Sanchez sealed the deal for Arsene Wenger’s side and pushed the Gunners to within a point of fourth-placed Liverpool.

Not even a contentious Peter Crouch goal could prevent Arsenal on a day where the North London side dominated possession and used it exceedingly well.

However, not everyone was up to scratch, and here Football Insider analyses the three worst players from their win.

Restored to the side after an injury lay-off, the French defender looked off the pace in comparison to his team mates.

The centre-back will be glad he was not tested more by Stoke, as when he was the Gunners looked susceptible to conceding.

Koscielny looked to duck out of an aerial challenge with the giant figure of Peter Crouch for Stoke’s goal, although the striker did appear to handle the ball into the back of the net.

The 31-year-old will be glad that the goal did not affect the result of the match, otherwise fingers might have been pointed his direction.

The French midfielder was another of Arsene Wenger’s four changes to the starting XI and perhaps the manager will be satisfied with his performance.

However the 26-year-old failed to have the same impact on the game as his fellow midfielders did, especially his central-midfield compatriot Granit Xhaka, who was a lynchpin in the middle of the park.

Coquelin meanwhile looked overwhelmed at times, and while he hassled and harried the Stoke players effectively, his distribution forward was less impressive.

Was actually tested very little but seemed to lack the composure that his defensive partner Rob Holding did.

Earned himself a yellow card for a reckless lunge in the first half, and failed to properly clear the ball into the crowd when needed in the second.

If this had been a better side than Stoke, you question whether Mustafi would have a) remained on the pitch and b) been leaving with three points.

In other Arsenal news, fans took to Twitter to praise this unsung hero after his performance against the Potters.