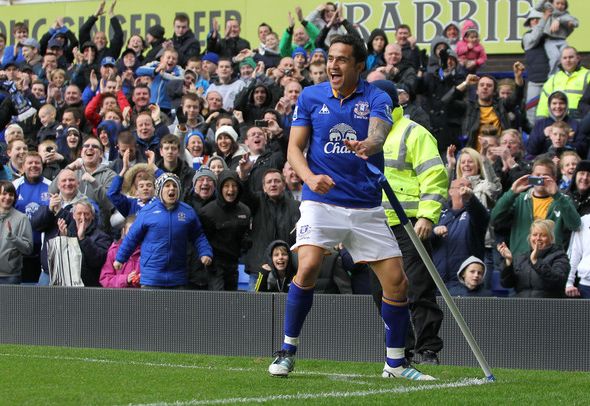 Everton great Tim Cahill has sent his congratulations to Romelu Lukaku after the current Toffees star overtook him as the second-highest Premier League goalscorer for the club.

The Belgian forward was in devastating form on Saturday afternoon as he helped the Merseyside club run out emphatic 6-3 victors against Bournemouth at Goodison Park.

Lukaku bagged himself four goals in the encounter with James McCarthy and Ross Barkley scoring the other two.

The goals marked his 78th for the club in all competitions, while also scoring 76 Premier League goals in total for both Everton and West Brom.

The 23-year-old’s second goal on Saturday was his 57th in the English top flight for Everton, taking over fan favourite Tim Cahill’s 56.

The Australian was quick to offer his congratulations to Lukaku on his personal Twitter account after the landmark, alongside a praising emoji and a heart emoji.

Cahill played in a more reserved attacking midfield position to Lukaku during his eight years with Everton between 2004 and 2012.

However, no one can discount the success Lukaku has had in Merseyside during his four years at the club.

The striker has two years left on his current contract and fans will now be hoping to see a lot more goals from the powerful forward.

In other Everton news, Toffees fans reacted on Twitter to Oumar Niasse’s winning goal against Liverpool.